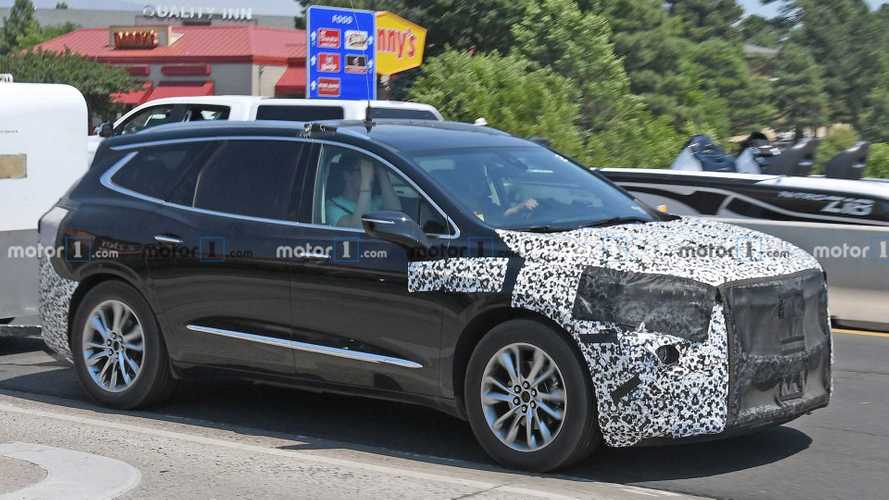 It's due for a mid-cycle refresh.

The current, second-generation Buick Enclave debuted for the 2018 model year, giving the three-row, seven-passenger SUV new styling inside and out. But automakers don’t like keeping things the same for too long, so GM is readying the Enclave for a mid-cycle refresh for the 2021 model year. Our spy photographers caught a prototype testing in Colorado with camouflage in the expected places.

Catch Up On The Latest Buick News:

Camouflage covers the front clip, fender/door accent, rear bumper, taillights, and part of the hatch, hiding everything we expect will change on the SUV. The Enclave is expected to borrow many of its new design cues from the 2020 LaCrosse, updating the grille, headlights, front and rear fascias, and more. It appears Buick is also giving the interior a major update as well as the dashboard is covered. The interior could borrow from the LaCrosse, too. There's a good chance it could look like the "Baby" Buick Enclave heading for the Chinese market.

The Enclave currently rides on GM’s C1, or Chi, platform that also underpins other GM three-row SUVs such as the Cadillac XT5, GMC Acadia, and Chevy Blazer. The current Enclave uses GM’s 302-horsepower (225-kilowatt) V6 engine for motivation, which routes power to the front or all four wheels through the nine-speed automatic gearbox. This isn’t expected to change when the 2021 model arrives.

The Enclave may have a ton of competition now, but when it arrived in 2008, it represented a turning point for the brand. The SUV ushered in a new design ethos for the company, helping it find success in the lucrative Chinese market. The Enclave also consolidated Buick’s lineup, eliminating the Rainer and Rendezvous. The chunky people mover received a mild refresh in 2013 before GM rolled out the second-generation offering for the 2018 model year. The Enclave is important not only for Buick, but GM as well, as the Detroit-automaker puts more emphasis on SUVs, crossovers, and trucks during its search for higher profits.