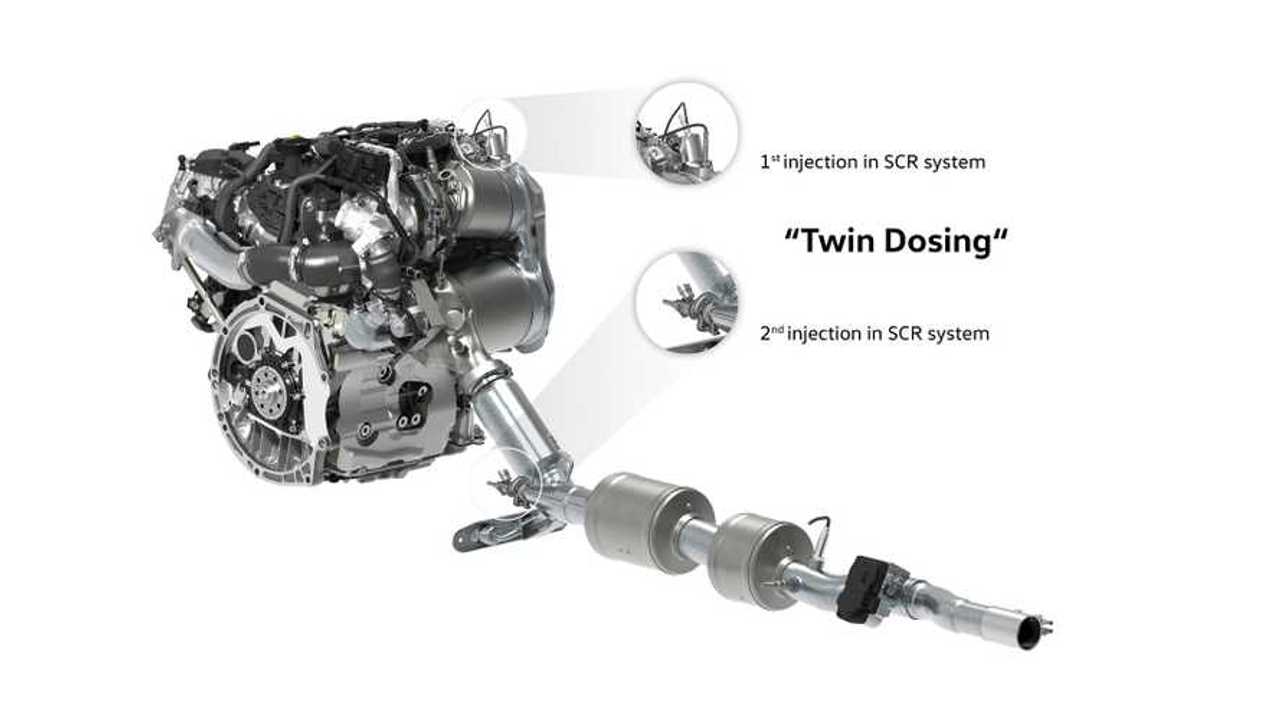 The diesel's not dead yet.

There’s a new Volkswagen Golf on the horizon and it will debut in October this year with European sales scheduled to kick off before the end of 2019. Why are we talking about the Euro-spec Golf MK8? Because it’s going to get a new generation of cleaner compression ignition engines, which could bring back the diesel to its former glory on the continent. The German company has just announced it has developed a smart SCR (selective catalytic reduction) technology, which significantly reduces nitrogen oxides (NOx) in the exhaust gas.

We know you’ll be reading this with a fair amount of skepticism following the Dieselgate scandal but VW says the new generation 2.0-liter TDI Evo diesel emits up to 80 percent less NOx in real-world driving scenario compared to its predecessor with the same displacement. The motor is already available for the facelifted Euro-spec Passat and will probably become one of the core engines of the new Golf on the Old Continent in terms of sales.

Volkswagen’s new SCR technology is pretty simple. The automaker calls it “twin dosing” and, basically, it uses two injectors of AdBlue in the SCR system. There’s one injector very close to the engine, where the exhaust gas temperatures are 900 degrees F and above. It is followed by another AdBlue injector right after the engine, which is part of a second SCR catalytic converter located in the underbody of the car. The exhaust temperatures there are significantly lower, which expands the window for after-treatment of exhaust gases.

The company says this new technology will be found in all TDI engines of the next-generation Golf. In the Passat, so far, it’s available for the 2.0 TDI Evo motor with 150 horsepower (110 kilowatts), which already meets the requirements of the future Euro 6d emission standard.

Take a look at the press release section below for more tech details.

Since 2018, only SCR exhaust gas treatment systems have been used in Volkswagen models with diesel engines. SCR (selective catalytic reduction) technology significantly reduces nitrogen oxides in the exhaust gas. Volkswagen has now developed the next evolutionary stage of the SCR system – so-called “twin dosing”. Adblue is injected selectively upstream of two SCR catalytic converters which are arranged in series. The system is used in the new Passat 2.0 TDI Evo with 110 kW (150 PS), which already meets the technical requirements of the future Euro 6d emission standard as a result.

Current RDE (real driving emissions) measurements confirm Volkswagen's type approval: in the new 2.0 TDI Evo with twin dosing, NOXlevels are reduced by around 80 percent compared to the previous generation of the respective models.

Volkswagen will now gradually introduce the new technology to all models with 2.0 TDI Evo engines. Following the 2.0 TDI Evo with 110 kW (150 PS) currently fitted in the Passat, the new Golf – soon to see its world premiere – will likewise feature twin dosing in all TDI variants.

The innovative twin dosing process compensates for a system-based disadvantage of diesel engines. Modern diesel engines emit less CO2 than petrol engines because diesel fuel has a higher energy density and the combustion process is more efficient. Diesel engines are also subject to special requirements, however, since fuel combustion takes place with excess air. The main constituent of air is nitrogen and this reacts with oxygen during combustion, thereby forming nitrogen oxides.

Ammonia is needed to reduce the nitrogen oxides produced in diesel engines. It is injected as an aqueous reducing agent (AdBlue) via a dosing module into the exhaust gas upstream of an SCR catalytic converter. Here, the solution evaporates; the reducing agent is split, combining with steam to form ammonia. In the SCR catalytic converter, the ammonia (NH3) then reacts on a special coating with the nitrogen oxides (NOx) to form water and harmless nitrogen (N2) – the main constituent of the air we breathe.

In existing exhaust gas treatment systems, a close-coupled SCR catalyst is located between the turbocharger, the diesel oxidation catalytic converter – which converts uncombusted hydrocarbons – and the flexible connecting piece to the silencer pipe. The SCR coating is applied to the honeycomb structure of the diesel particulate filter, thereby enabling a single component to perform several functions. The close-coupled arrangement means that the exhaust gas temperatures required for high conversion rates can be achieved quickly after a cold start – the ideal range for conversion rates of more than 90 percent is between +220°C and +350°C. These conditions are met in many operating situations.

Conversion rates do not drop above +350°C – thanks to twin dosing-system. Temperatures at this level occur for example when driving at high speeds on the motorway, at high engine speeds over prolonged periods of time and when driving uphill, especially if the vehicle is fully loaded or towing a trailer.