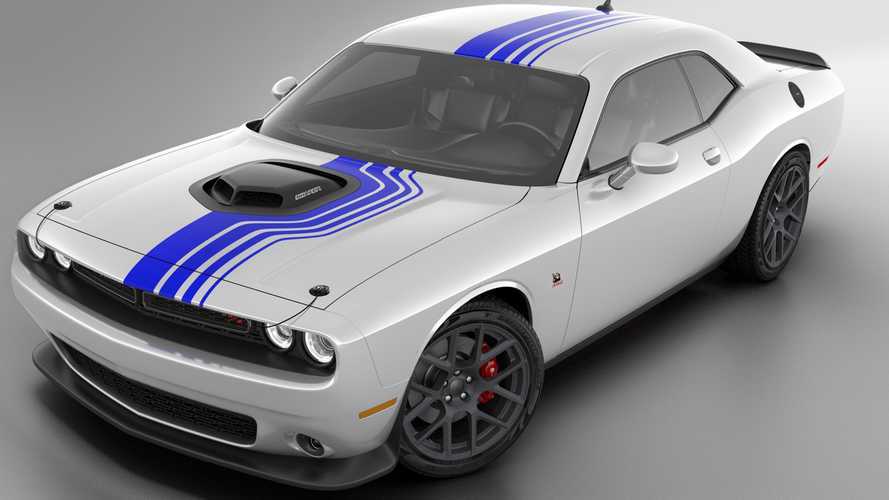 Mopar has long been Dodge’s in-house performance group for go-fast parts and look-fast accessories. This year marks the tenth anniversary of the brand’s touch on the enduring Challenger, which itself celebrates over a decade of continuous production and success in the modern Detroit muscle car arena. As such, Dodge offers up yet another special-edition version of its never-say-die two-door, called simply the Mopar ’19 Dodge Challenger.

The upgrades are primarily for appearance, though Mopar does provide a few mechanical tweaks as well. The highly visible Mopar Shakedown graphics will catch the eye first, materializing here with the big blue center stripes that bend around Mopar’s cool Shaker Hood package. The exterior also gets hood pins, a decklid spoiler, and 20-inch wheels with Mopar-branded center caps. Inside isn’t quite as dressed up, though you will find polished door sill plates with Challenger emblazoned on them. Mopar badging on the dash and seats reminds driver and passengers this is a special Mopar-blessed ride.

As for mechanical upgrades, they are slim but noticeable. A Mopar cold-air intake feeds the engine, while a set of strut tower braces add some rigidity to the big bruiser. The limited-edition Mopar ’19 Dodge Challenger is only available on R/T Scat Pack models, so there’s already ample power with the 392 Hemi V8 producing 485 horsepower (362 kilowatts). The power is sent rearward through a standard-issue six-speed manual transmission, though an eight-speed automatic is optional.

“Over the last decade, we’ve customized an impressive group of vehicles with exclusive Mopar performance parts and accessories that our enthusiast customers crave,” said Mark Bosanac, FCA’s head of Mopar service, parts, and customer care in North America. “This year we’re commemorating our tenth Mopar build with another unique and collectible Dodge Challenger, which continues to be the modern muscle car every bit as beloved today as the first generation vehicle was 50 years ago.”

Dodge will offer only 100 Mopar ’19 Dodge Challengers in North America, painted either Pitch Black or White Knuckle. Each car will come with documentation that shows its manufacture date as well as production number. Pricing starts at $45,835 and order banks open in September.

“Over the last decade, we’ve customized an impressive group of vehicles with exclusive Mopar performance parts and accessories that our enthusiast customers crave,” said Mark Bosanac, Head of Mopar Service, Parts & Customer Care, FCA - North America. “This year we’re commemorating our tenth Mopar build with another unique and collectible Dodge Challenger, which continues to be the modern muscle car every bit as beloved today as the first generation vehicle was 50 years ago.”

Mopar ’19 Exterior
Available in either Pitch Black or White Knuckle, the Mopar ’19 Challenger builds upon the popular R/T Scat Pack model with a variety of head-turning exterior touches. Most noticeable is the unique Mopar Shakedown graphics, accented with asymmetrical Mopar Blue center stripes that run from the top of the front fascia to the rear decklid spoiler.

The popular Shaker Hood package by Mopar provides a hint of vintage styling with an active, air-gulping scoop flanked with Shaker badges on both sides. Functional black hood pins provide a classic look. Out back, the rear decklid spoiler carries a unique Mopar Design badge.

A Mopar cold air intake delivers performance-enhancing airflow to the engine. Mopar strut tower braces help increase structural rigidity of the chassis for sharper handling. The braces and strut caps are silver-coated to dress up the underhood appearance.

Owner’s Kit
The Mopar '19 is delivered with an exclusive Owner’s Kit, packaged with a “birth certificate” with the exact date of manufacture and the proprietary build number. Also included is an exclusive full-color Mopar '19 booklet, a unique keepsake with engraved vehicle number and a Mopar '19 rendering produced by the Mopar design team.

Decade of Customization
The Mopar '19 Dodge Challenger joins an exclusive club as the 10th limited-edition, Mopar-modified vehicle delivered straight from the factory. This limited production run will include 100 units - 90 vehicles for the U.S market and 10 vehicles for Canada.

With a starting U.S. MSRP of $45,835, dealer orders for the Mopar ’19 Dodge Challenger open in September 2019. Vehicles are expected to begin arriving in dealerships in the fourth quarter 2019.