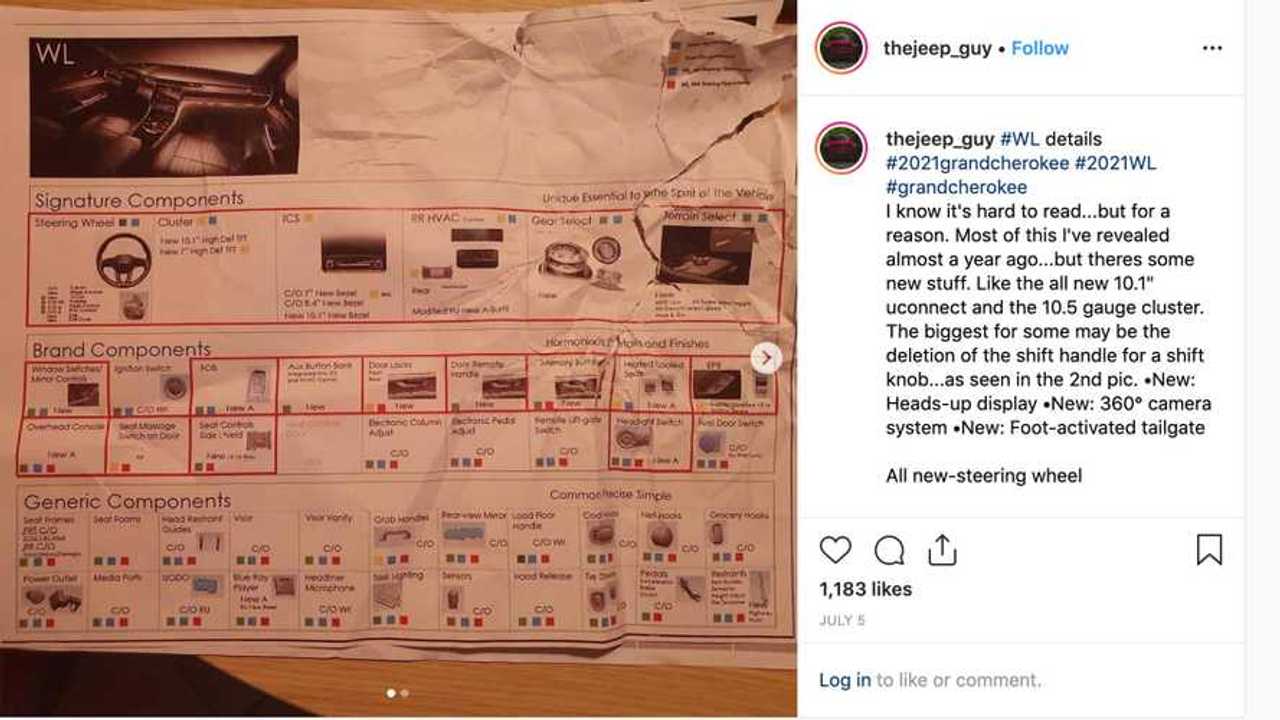 There are lots of screens in there and attractive new trim.

The 2021 Jeep Grand Cherokee could have a major interior update for the big crossover's new generation, including using a rotary dial for the gear selector. The info comes from a crumpled document that looks straight out of a trash can. The page looks like it could be legitimate, especially since the original Instagram post from thejeep_guy has been removed – but not before we grabbed the above screenshot.

When contacted by Motor1.com about the info on this paper, Jeep responded: "we don't comment on potential future products."

The changes in the cabin appear comprehensive. The document indicates drivers look at a new 10.5-inch instrument panel display and grip a redesigned, four-spoke steering wheel. A 10.1-inch screen for the infotainment system joins the lineup as an even larger choice above the 8.4- and 7.0-inch versions. On the center console, the traditional shift lever is gone, and there's now a dial for controlling the transmission.

The document also indicates there's a lot of new trim in the interior. The revised components include the window switches, seat controls, door locks, and overhead console. The Terrain Select controls also have a redesign with updated buttons.

The new Grand Cherokee would begin production in the spring of 2021, according to WLJeeps.org without citing a source for this info. There would allegedly be powertrain updates like a new 2.0-liter turbocharged engine with the eTorque mild hybrid system, and the 5.7-liter V8 Hemi would have this electrification tech, too. A plug-in hybrid also joins the lineup, but WLJeeps doesn't specify what engine it would use. The 3.6-liter V6 carries over without any changes.

Recent spy shots provide a glimpse of the exterior of the new Grand Cherokee. The proportions at least make the crossover look bigger than the current one, and the styling appears more chiseled. Under the skin, there's reportedly the same platform from the Alfa Romeo Giulia and Stelvio. The info from WLJeeps.org indicates the model would still offer two rows of seats, despite the larger size. Doing so would allow the forthcoming Grand Wagoneer to be something special in the Jeep lineup by offering a higher passenger capacity.