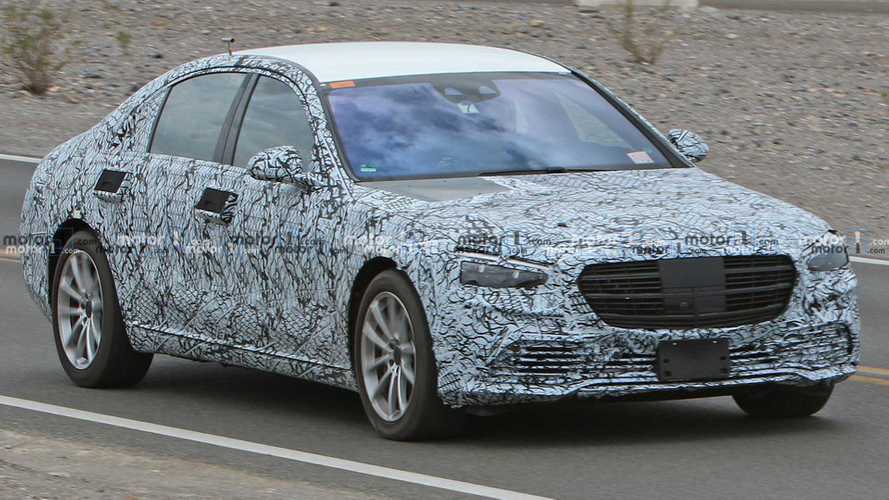 The overall design doesn't look too different, but there's lots of new tech.

The next-gen Mercedes-Benz S-Class sedan is a fairly common site in spy shots recently, but a new batch of photos catches a test mule with a little less camouflage during development in the United States.

The engineers strip off a little of the front end's camouflage, which reveals the general shape of the lower fascia. Horizontal slats span the piece, and the grille has a matching shape. The solid portion of the grille likely hides the variety of sensors for the sophisticated vehicle's driver assistance technology.

Judging from other spy shots, the covers over the doors hide pop-out handles. The design gives the new sedan a smooth look when on the road.

From the back, it's clear that there are two test mules in these spy shots. One of them features a black covering on the lower fascia and taped sections, which are likely for more sensors. The other car has camouflage over the rear.

What Is This Thing On A Mercedes S-Class Prototype?

On the inside, spy shots indicate that the S-Class has a huge, tablet-like display on the center console. Current info suggests that the new model should be a technological marvel.  The systems should include cutting edge assistance technology and sophisticated headlights capable of projecting shapes and words on the road.

The new S-Class should have a reveal in 2020 and be on sale in the United States for the 2021 model year. Spy shots already tell us that a more luxurious Maybach variant is under development, and it would arrive later. Expect a wide variety of available powertrains ranging from highly efficient electrified choices to high-powered AMG offerings.