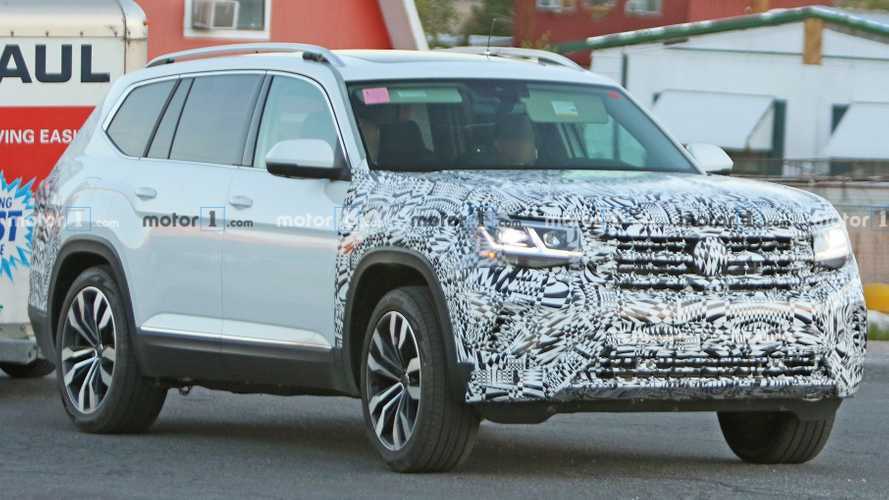 Minor changes are on-deck for the three-row SUV.

Volkswagen is making good use of the summertime heat in Death Valley, California. Spy photographers braved the triple-digit temperatures to grab these shot of the forthcoming facelifted Atlas. Technically speaking, this is our first look at the updated three-row SUV but we've actually glimpsed the redesign before. Ironically enough, VW invited us to Death Valley earlier this year to drive the Atlas Cross Sport Prototype – basically a two-row version that will debut for the 2020 model year.

The Future Of Atlas:

We can’t say for certain if the Cross Sport will share the exact same features as the revamped Atlas seen here. Among other things, the prototype we drove was fully wrapped in camouflage, but we certainly see similarities. Compared with the current model, the future SUV will get new headlights and a redesigned grille that looks slightly larger. Updates to the front fascia are coming as well, with vertically oriented driving lamps adorning the corners. At the rear, the only difference we can make out are updated taillights.

Other changes are unknown at this time, but it's believed both interior and powertrain configurations will largely carry over from the current generation. Tech updates to the infotainment system are certainly possible, with changes and additions to driver safety systems also likely. Power-wise, the Atlas currently offers buyers a choice between a 2.0-liter turbo four-cylinder producing 235 horsepower (175 kilowatts), or a 3.6-liter V6 making 276 hp (206 kW). It’s possible either engine could see a small bump in power or efficiency, but it should still go through an eight-speed automatic to either the front wheels or all four.

While this is our first sighting of the updated Atlas, the level of camouflage (or rather, the lack thereof) suggests there’s not a significant amount of testing left to do. We know the new Atlas Cross Sport is slated for the 2020 model year, so seeing the refreshed three-row Atlas early-to-mid next year as a 2021 model is likely.