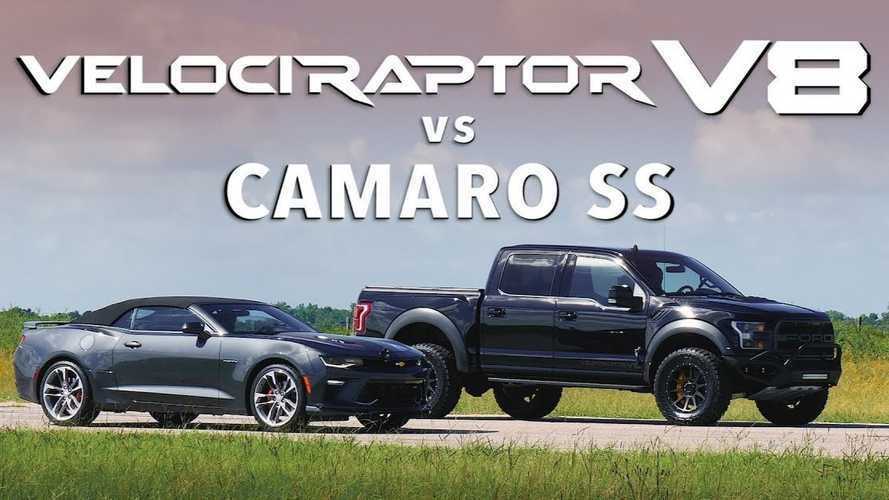 They are surprisingly evenly matched on the strip.

The tuned Ford F-150 VelociRaptor V8 from Hennessey shows off its performance in a new vehicle where the tuner lines the supercharged truck against a stock Chevrolet Camaro SS convertible in a series of drag races. While these two vehicles don't have much in common, they make for close competitors at the strip.

Without spoiling the results, it's interesting to see how close the two models are off the line. Midway through the runs, either of the vehicles could take the victory.

The Hennessey VelociRaptor V8 puts a supercharged 5.0-liter V8 under the hood of a Ford F-150 Raptor. The 2.9-liter supercharger runs at 7 psi of boost and pushes the engine to 758 horsepower. On the dyno, the VelociRaptor V8 makes 557 hp (415 kW) and 449 pound-feet (609 Newton-meters) at the wheels, according to the company. The tuner claims the muscle truck reaches 60 miles per hour (96 kilometers per hour) in 4.1 seconds and crosses the quarter-mile in 12.2 seconds. Prices start at $147,950, which includes the Raptor donor vehicle for all of the work.

More Videos Of The Velociraptor's Attack:

In addition to the big engine upgrade, Hennessey loads the VelociRaptor V8 with a six-inch suspension lift. It now rides on 20-inch wheels with 37-inch off-road tires. The company also fits more aggressive bumpers, including lots of LED lighting on the one in front.

Chevy introduced the Camaro with the 50th Anniversary Edition pack like the one in this video for the 2017 model year. Like other versions, the 6.2-liter V8 makes 455 horsepower (339 kilowatts). While this is significantly less than the VelociRaptor V8, the car weighs quite a bit less, too.