Porsche is surely up to something.

If you’re a regular Motor1.com visitor and you have an appetite for spy shots, you’re probably already familiar with the Panamera Turbo prototype carrying a license plate ending in “710.” The adjacent video shot at the Green Hell shows the very same test vehicle in action, together with several other cars going flat out (and even sideways a bit) on the Nordschleife’s tarmac. 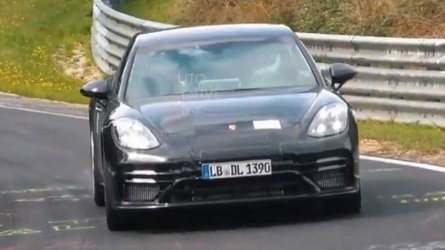 What do all these prototypes have in common? They may look like a fairly standard Panamera Turbo, but they all are considerably louder than the standard car. We can see the front canards and the rear gurney flap on one of the prototypes, but interestingly, there’s no sign of the elongated exhausts our spies caught earlier in the week.

These work-in-progress cars pumping out more decibels are rumored to represent a future hardcore version of the Panamera. According to our very own spy photographers, Porsche is working on an 820-horsepower variant of the large hatchback due to be based on next year’s facelifted Panamera. From what we can tell by checking out these cars, the hardcore derivative will be based on the regular Turbo and not on the Turbo S E-Hybrid, so that power might come exclusively from a good ol’ combustion engine.

Here Are The Spy Shots: 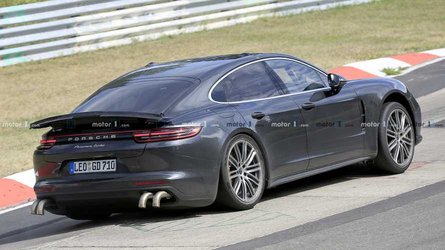 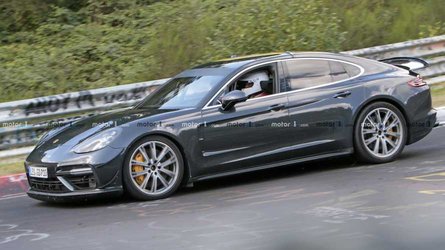 That being said, the proliferation of mild hybrid systems is expected to spread to the facelifted Panamera, which means the so-called “Über-Panamera” might be electrified in one way or another. Rather than being a regular member of the lineup, the 820-hp monster will allegedly be a special edition built in limited numbers at a hefty price tag.

With conventionally powered cars, high-performance hybrids, and the upcoming electric Taycan, Porsche truly has all the bases covered. Electrification is indeed the wave of the future in Stuttgart as even the 911 will get a plug-in hybrid setup in the next decade. As for a zero-emissions derivative, it won’t happen anytime soon.