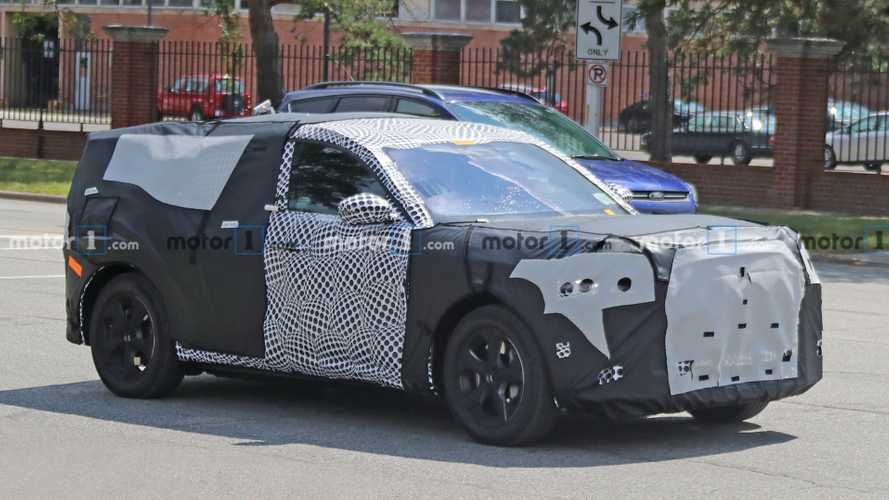 A preview is scheduled for November.

In just a few months, we'll get our first real look at the long-awaited, Mustang-inspired Ford electric SUV. Reports say Ford will divulge new details in November, likely at the Los Angeles Auto Show. But, we probably won’t see the final product until 2020 before the SUV goes on sale for the 2021 model year. To hold us over until then, new spy photos show glimpses of the Ford EV’s near-production bodywork hiding under camo.

You might not be able to tell given the extensive camouflage, but this is our first look at Ford’s Mustang-inspired electric SUV in its near-final form on road. Our spy photographers captured it testing near the Blue Oval’s headquarters in Dearborn, Michigan. At first glance, there’s not much to look at outside of the obvious cladding – but dig a little deeper and there are some interesting details to point out.

First off, ignore the Ford Flex-shaped greenhouse in the rear. The black camouflage is clearly a facade designed to hide a much sleeker, coupe-like shape. Ignore the bland five-spoke wheels and taillights, too. Neither of those features is likely to reach production. But, there are some things to note on the front end.

It appears all that camo on the prototype’s front fascia hides near-production cues like to the ones teased previously. The LED headlights and bulging "grille" piece show up most prominently behind the covering. Though, based solely on these photos, we can’t find any "Mustang-inspired" cues to note. Maybe more spy photos will reveal the final shape closer to a debut.

When it debuts in full, sometime in 2020, expect Ford’s Mustang-inspired electric SUV (likely dubbed the Mach E) to feature a 300-mile (482-kilometer) driving range. Things like price and trim levels are still unknown, but the Blue Oval’s EV will compete directly with the Tesla Model Y, which itself goes on sale next year and starts at less than $40,000. We should know more about the Ford closer to the crossover’s preview in just a few months.