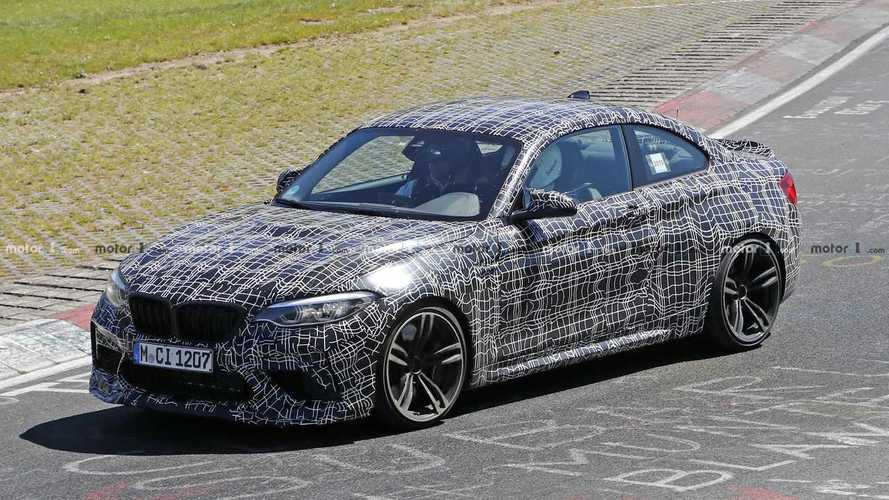 The spirit of the beloved 1M Coupe will be revived in just a few short months if we were to rely on a new report published by BMW Blog. The enthusiast website has it on good authority the M2 CS will premiere in the second half of November at the Los Angeles Auto Show, with an online reveal likely to take place even sooner than that.

The meaner M2 has been spotted multiple times and a great deal has been written about what will likely end up being a limited-run special edition. Production is rumored to be capped at just 2,200 units for the entire world, so you can expect a significant premium over the M2 Competition to justify the model’s exclusivity. The extra money BMW is going to charge customers will also have something to do with the carbon fiber diet, with the coupe’s hood, front splitter, roof, side mirror caps, rear spoiler, and diffuser to be made from the lightweight material.

BMW will attempt to lure in buyers by massaging the S55 engine to produce a yet-to-be-confirmed 444 hp, which would represent a nearly 10% bump compared to the M2 Competition while sticking to the same 406 pound-feet (550 Newton-meters) of torque. The engine will be hooked up to either a six-speed manual or a seven-speed, dual-clutch automatic, so you won’t be hearing any complaints in this regard.

A leaked dealer bulletin that “escaped” onto the World Wide Web some months ago revealed BMW plans to install an adaptive M suspension and an M exhaust as standard equipment, along with an optional set of carbon-ceramic brakes for the 19-inch wheels as an upgrade over the base M Sport brakes.

As far as pricing is concerned, the M2 CS will cost significantly more than the $58,900 M2 Competition and might get close to the $69,150 M4 Coupe or even surpass it given the numerous upgrades and low production numbers.

Have You Seen The Prototypes?