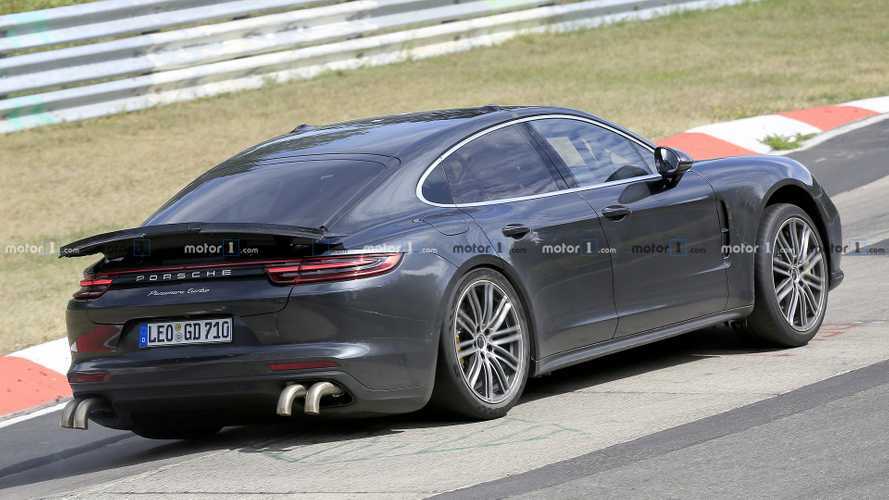 With very little ground clearance, the prototype looks as if it's glued to the Nürburgring tarmac.

Remember that Porsche Panamera Turbo prototype we caught last week carrying what appeared to be an aero kit? Well, we have another head-scratcher for you. The very same prototype has been spotted again at the Nürburgring, only this time it was missing the canards on the front bumper and was basically hugging the road with minimal ground clearance.

By far the biggest change can be noticed at the back where the prototype lacks the Turbo’s angular exhaust finishers. Instead, the actual exhaust system with its quad pipes is visibly longer than what we’re used to and is angled towards the road. One plausible scenario for the use of this elongated exhaust is the engineers wanted to make it quieter to comply with noise regulations like it was the case last year with a Corvette ZR1 prototype.

It probably means Porsche was testing a modified engine, with our sources telling us the "Über-Panamera" will get 820 horsepower from an upgraded configuration of an existing engine.

820 is a tremendous amount of power, especially if you take into consideration the Panamera Turbo S E-Hybrid has to make do with “only” 670 hp. Whether this possible range-topper will also rely on electrification is not known at the moment, but a bump of 150 hp over the current flagship variant has allegedly been confirmed by engineers while talking to spy photographers.

The 820-horsepower crown jewel of the range is rumored to land at some point in 2020 together with the facelifted Panamera lineup. Expect low production numbers and an exorbitant price tag, one that could easily surpass the $186,200 sticker of the Panamera Turbo S E-Hybrid. This version has all the ingredients to go after the Nürburgring four-door record, which is currently being disputed by the four-doors-but-only-two-seats Jaguar XE SV Project 8 and the Mercedes-AMG GT 63 S.

The mid-cycle refresh might include not only a hardcore iteration, but also a couple of two-door body style derivatives to evoke the spirit of the 928 coupe and the one-off 928 cabriolet concept.