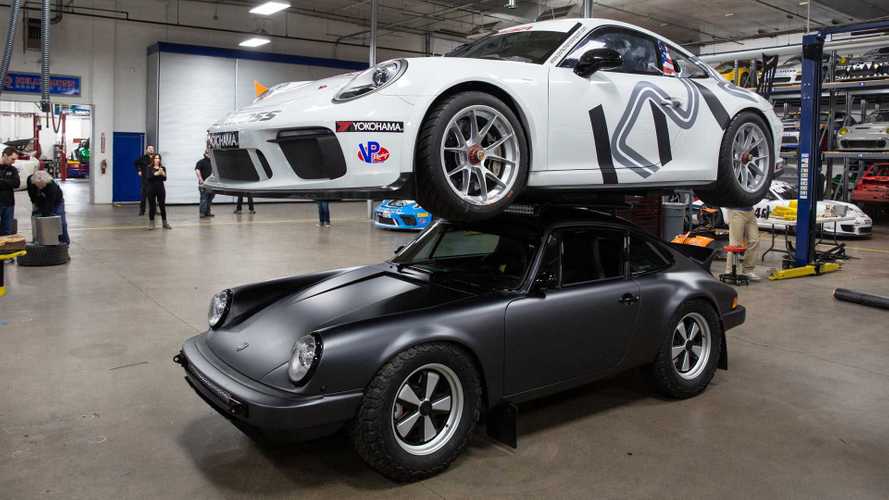 This crazy cool 911 overlander has no problem with a rooftop tent.

We’ve seen more than a few classic Porsche 911 Carrera safari conversions. And we’ve seen one adventurous individual install a rooftop tent on a 996 Carrera 4S. Kelly-Moss Road and Race in Wisconsin have since accomplished that which we’ve been patiently waiting for – a proper safari 911 with provisions for rooftop camping. However, as you’ve no doubt seen by the epic Porsche-on-Porsche photo gracing the top of the article, this car is so much more than that. So. Much. More.

There’s no possible way we can condense all the details of this epic classic Carrera build, so be sure to hit kellymoss.com for all the details. As for the highlights, this 1984 911 Carrera may look relatively stock, but pretty much every body panel has been removed and retouched in one way or another. For instance, the wheel arches are nearly three inches larger than a standard 911 of this era, and the inner front arches have an extra five inches of clearance so the massive BG Goodrich tires can fit.

Obviously, there’s a custom-fabricated cage inside, and it’s extended into the front chassis for exceptional strength and support. A custom roof rack also ties into the cage, and it clearly has no trouble supporting heavy loads. Compared to a race car, a rooftop tent is basically a featherweight by comparison, but despite all the fabrication and reinforcement, this 911 only weighs 2,500 pounds.

That means it can also still perform like a proper 911. That’s further emphasized by the modified 3.4-liter flat-six that develops 340 horsepower (254 kilowatts), handled by a built 915 manual gearbox. Eibach springs offer 11 inches of travel in front and 10 inches at the rear, with Exe-Tc adjustable twin-tube gravel dampers plugged in as well. The cockpit gets a digital makeover that includes a reverse camera, the seats are leather Recaros, and yeah, these are just the highlights.

This one-off build named “Willy” has to be one of the most extreme rally 911s we’ve ever seen. Perhaps the best part, however, is the care that was taken to keep it looking relatively stock. Motor1.com’s motorhome archive is full of epic overlanders and adventures vehicles, but this could be the one we’d choose over all the rest.