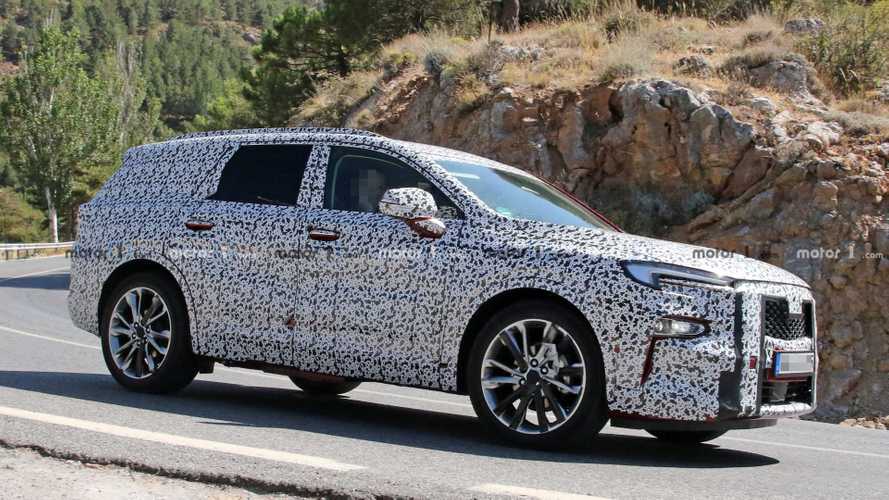 It might be a new Opel, but we're pretty sure a Peugeot 5008 is beneath the skin.

[UPDATE, August 15] As some of our readers have pointed out, the camouflaged prototype is not a new large Opel SUV, but the next-generation Buick Enclave for the Chinese market. We apologize for the mistake.

Big SUVs aren’t limited to the American market. Case-in-point is this big seven-passenger people mover spied testing across the pond in Europe for the first time. Our spy teams identify it as an Opel, but the brand certainly doesn’t have anything this large in its portfolio. In fact, we believe this as-yet-unnamed SUV is riding on the bones of a Peugeot 5008.

How do we know this isn’t just an updated Peugeot? We can’t be entirely certain obviously, but through the camo wrap and covers on the front fascia, we see Opel’s distinctive daytime running lights similar to the lenses used on the smaller Grandland X – another Opel SUV with Peugeot underpinnings. Similarly, the taillight design is more attune with the Grandland X as opposed to the 5008, though admittedly, in profile this prototype certainly carries the shape we’re used to seeing on the big Peugeot. It also means this new Opel will likely carry the 5008’s front-wheel-drive layout.

With the current-generation Peugeot 5008 having debuted for the 2017 model year, we wouldn’t expect to see this extensive of a makeover anytime soon. Of course, Groupe PSA (of which Peugeot is part) acquired Opel from GM back in 2017, so it’s not as if sharing platforms between the companies is a shocking endeavor. Add in the near-perfect match of those daytime running lenses, and the conclusion is rather obvious. We don’t know the name of this big seven-passenger Opel just yet, but it’s coming.

The final question of the day, then, is exactly when it will arrive. This is the first time we’ve spotted a prototype in public, which usually means we’re early in the testing process. However, from what we can see, this test vehicle is wearing production-spec body panels. Provided everything under the skin is borrowed from the already-established Peugeot 5008, it’s possible we could see this Opel reveal in early 2020.