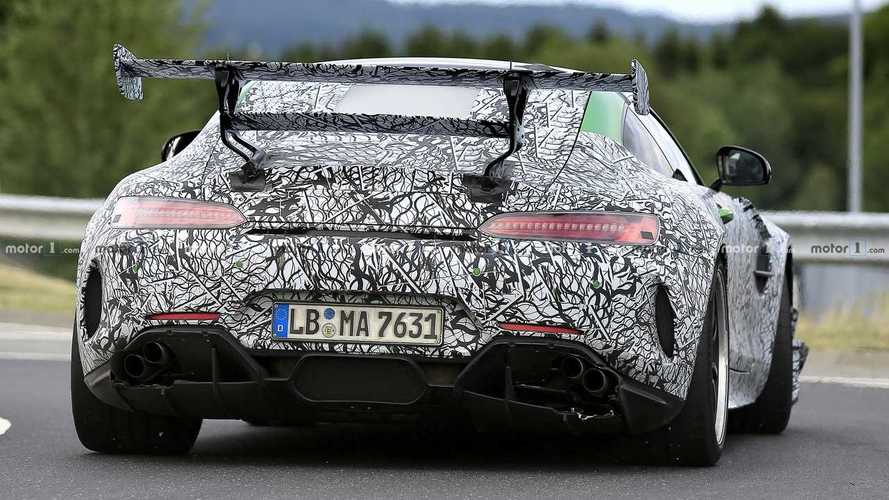 [UPDATE, August 15] 21 new spy shots have been added at the beginning of the gallery, below.

Last week we caught a Mercedes-AMG GT R wearing camouflage and a crazy hood with some seriously large vents in it. Today there’s another sighting – this time at the Nürburgring – and the bonkers hood has brought some friends. As far as we can tell, this is the forthcoming GT R Black Series, though it’s unclear whether these wild aero tweaks will make it to production.

What’s up with the massive biplane spoiler on the decklid? It’s nothing like the previous Black Series prototypes we've seen. For that matter, the front fascia sports several adjustable winglets that we haven’t seen before, either. Another interesting addition on this prototype are louvered vents in the front fenders, and they appear to draw straight from the AMG GT R Pro. As for the rear, let’s just say we highly doubt that’s a production-spec fascia, because janky doesn’t even begin to describe what we see there.

Is Mercedes testing out different aero packages for the Black Series? That’s certainly a possibility, but with such few sightings under our belt thus far, it’s hard to say one way or the other. Either way, we do know the rebirth of the Black Series should be seriously fast, as rumors tell us this GT R will pack over 700 horsepower. It seems the folks from Affalterbach have visions of besting the Porsche 911 GT2 RS – a vehicle which can lap the Green Hell in just 6 minutes 40 seconds. Granted that’s a modified variant, but one doesn’t simply turn such a quick time with massive power alone. It certainly helps, and we suspect AMG’s 4.0-liter twin-turbo V8 is capable of generating over 700 ponies. But the aero wizardry should help the front-engined Merc stick better to the Nordschleife’s tricky high-speed corners.

We’ll have to wait a while yet to find out just how fast the mental Merc can go. A debut should happen sometime in 2020.