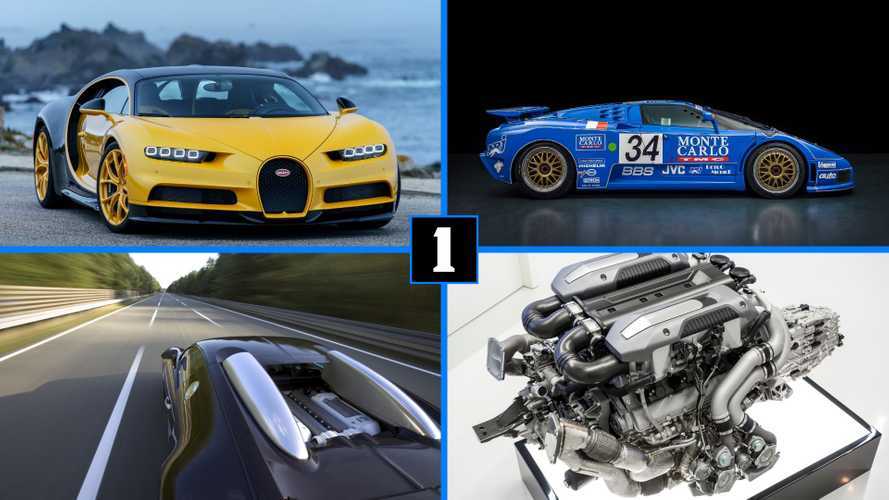 Bugatti hasn’t built many cars throughout its history, but each model is extraordinarily memorable. In recent times it can be argued that the French company pioneered the hypercar – the class above mere supercars where technology and performance simply transcend to a completely different level entirely. We’re well-acquainted with the Chiron and Veyron, but the EB110 often falls under the radar.

Bugatti recently reminded us of just how amazing the EB110 was for its day, and we simply had to share with this brief-but-interesting comparison of Bugatti’s holy trinity from the last 30 years.

We’ll start with the latest production-level Bugatti, and yes, we know that’s technically the Divo. Underneath the snazzy bodywork, however, is the same Chiron that took us all by storm a few years ago and still stirs hearts around the world. The big Bugatti’s showpiece is, of course, its quad-turbocharged, 8.0-liter, W16 engine producing 1,500 horsepower (1,103 kilowatts) and 1,180 pound-feet (1,600 Newton-meters) of torque.

All that power goes through a seven-speed dual-clutch transmission to all four wheels, and with launch control engaged, the Chiron can officially go from 0-62 mph (100 km/h) in 2.4 seconds. Its top speed of 261 mph (420 km/h) is electronically limited, but many believe it can get close to 300 mph given enough room to run, not to mention tires that can withstand the stress. Chiron production continues at a slow-but-steady pace, with 500 examples ultimately planned.

Throughout automotive history, there are very few cars that can be identified as true game-changers. When the Veyron appeared in 2005 with upwards of 1,000 hp (746 kW), there was absolutely nothing even remotely comparable to it. Reborn under the guidance of Volkswagen, the Bugatti's 8.0-liter quad-turbo W16 with a seven-speed DCT and all-wheel drive (same basic platform as used in the Chiron) was a tremendously capable powertrain that could send the hyper to 62 mph (100 km/h) in 2.5 seconds. And yet, the Bugatti could also be driven casually around town without any fanfare.

Ironically, Bugatti’s modern revival came at the hands of the Italians, specifically Romano Artioli. He acquired the defunct brand in the late 1980s and dropped roots in Campogalliano, where the EB110 would be built. Yes, it looks quite a bit different from the VW-era Bugattis, and with a maximum output of 611 hp (450 kW) in the SS model, it’s certainly not as powerful as its predecessors. That said, the first modern-era Bugatti is actually surprisingly similar to W16 twins in many ways.

For starters, the EB110’s 3.5-liter V12 wielded quad turbochargers similar to the big W16 engine. It shifted gears the old-fashion way with a six-speed manual, but like the Chiron and Veyron, power went to all four wheels. It also incorporated active aero features, something far ahead of its time, and though its 0-62 mph (0-100 km/h) time was only 3.3 seconds, it could still run well beyond the 200 mph mark with a top speed of 221 mph. Just 128 examples were built, making it the rarest Bugatti in a trio of very rare, exclusive machines.

If you could choose just one of these incredible machines for your garage, which would it be?

Bugatti succeeded in producing a superlative sports car in 1991 with the EB110. Developed and created by Bugatti enthusiast Romano Artioli, the EB110 was in a league of its own – an epoch-making development that was decades ahead of the competition. It was created from scratch, without a predecessor model. Everything was new – such as the 3.5-litre V12 engine with four turbochargers. Five valves per cylinder ensured a fast charge cycle. For the first time in a super sports car, an all-wheel drive system was used was permanently able to deliver power from 560 hp to 611 hp. The EB110 manages the sprint from zero to 100 km/h in just 3.3 seconds, with a top speed of 351 km/h. This was a world record for a series-production car – and a speed range that very few vehicles achieve even today.

Until 1995, the super sports model was crafted by hand in Campogalliano, Italy, not in France. This was for practical reasons: other super sports car brands such as DeTomaso, Ferrari, Maserati and Lamborghini are located nearby, so qualified personnel was available for the company to hire. But the ambitious project failed, not least because of the deteriorating economic situation. “The EB110 is a true super sports car that joins an extensive lineage of extraordinary Bugatti ancestors – an epoch-making development”, says Stephan Winkelmann, President of Bugatti. With only 128 series-produced vehicles and a starting price of 450 million Italian lire and 550 million Italian lire, the EB110 GT and the EB110 SS were reserved for a very exclusive clientele.

It was not until 20 years later in 2005 that Bugatti launched the Veyron – a new vehicle that again reflected a whole range of superlatives. A super sports car progresses to become a hyper sports car: not surprising in view of the more than 1,000 hp delivered by the 8.0-litre W16 engine. As with the EB110, Bugatti continued to pursue its philosophy with the Veyron: all-wheel drive, four turbochargers and carbon monocoque. In addition, the vehicle featured selected materials and high-quality workmanship that were second to none.

As before, all vehicles were made by hand, but from now on in Molsheim, France – where Ettore Bugatti originally founded his company 110 years ago. “The Veyron catapulted Bugatti into a new dimension in the early 2000s. As the first luxury hyper sports car, we set standards at the time. It’s something that continues to make us proud to this day,” says Stephan Winkelmann. Like the EB110, the Veyron broke several acceleration and speed records and redefined what top-level automotive design was capable of: exceptional driving performance, superb engineering skills and a previously unheard-of level of quality in vehicle construction. With a top speed of over 400 km/h, it was the fastest series-production sports car. Bugatti built the Veyron up until 2015.

Since 2016, Bugatti employees in Molsheim have produced the hyper sports car Chiron – another extraordinary vehicle and one that is almost impossible to compare with any other automobile. And yet there are some parallels to the EB110 and the Veyron: like its predecessors, the Chiron features all-wheel drive, four turbochargers and a carbon monocoque. In addition, it has outstanding workmanship and driving performance figures that are hard to beat. The iconic 8.0-litre W16 engine delivers at least 1,103 kW/1,500 hp and 1,600 Newton metres of torque. This again ensures breathtaking driving performance. It accelerates from 0 to 100 km/h in just 2.4 seconds and to 200 km/h in just 6.1 seconds; the Chiron reaches the 300 km/h mark in 13.1 seconds. The maximum speed of this series-production vehicle is not cut off until 420 km/h. In addition, the Chiron offers very balanced and very safe handling. The Veyron and Chiron are both hyper sports cars, yet still completely different vehicles. The aerodynamics, suspension, engine, steering and all-wheel drive are even more refined in the Chiron – more direct and precise with even better feedback than in the Veyron. The differences compared to the EB110 are huge. “Today, the Chiron combines ultimate performance with exclusive design, as well as the highest possible quality in terms of materials, quality and comfort. In this combination it is truly unique in the world – the ultimate luxury hyper sports car,” says Stephan Winkelmann.

Today these three vehicles share the fact that they are very rare. While only recently the 200th of the Chiron’s limited production run of 500 left the Atelier, Bugatti produced only 128 of the EB110, and the Veyron amounted to 450 vehicles over all versions. These are vehicles that are now in demand – and increasing in value, too.

In addition, all three model names are directly related to Bugatti. While the EB110 is an acronym for Ettore Bugatti’s 110th birthday, the name of the Veyron recalls French racing driver and Le Mans winner Pierre Veyron, who was active between 1933 and 1953 and worked for Bugatti as a test driver and development engineer. The Chiron was named after Monegasque racing driver Louis Chiron, who raced with and for Bugatti between 1926 and 1933.

Bugatti does not only look back into the past, however: it is mainly geared towards the future. The development of new projects is progressing. With the Chiron1 and the Divo2, the Molsheim workshop currently produces the most exclusive, most powerful, fastest and most extraordinary vehicles in the world. In the spirit of Ettore Bugatti, who once said: “If it's comparable, it's not a Bugatti.” Each one is a unique specimen in its own right. Unique – and not comparable. If at all, then only among each other.