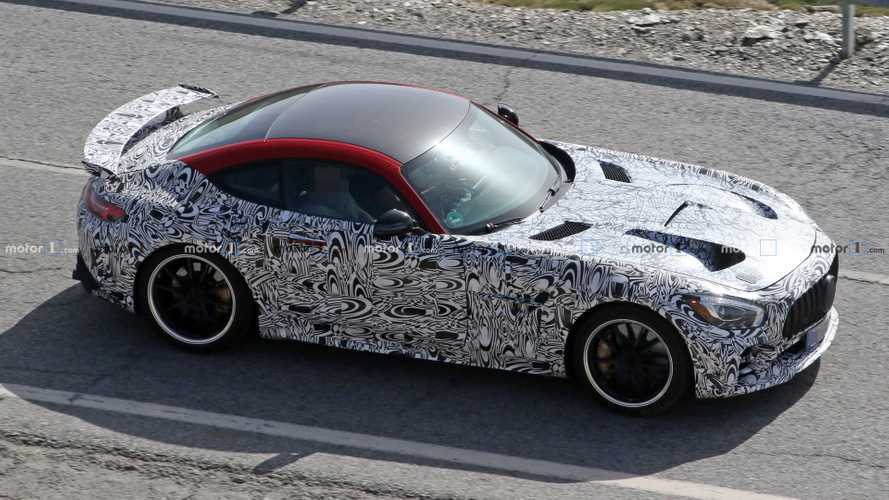 The twin-turbo 4.0-liter V8 lurking from underneath is rumored to have 700+ hp.

AMG GT, AMG GT S, AMG GT C, AMG GT R, and the limited-run AMG GT R Pro. That’s how many versions of the high-performance coupe Mercedes-AMG is offering, plus roadster versions for all of them with the exception of the Pro. Come 2020, we’ll meet the meanest of them all as next year the folks from Affalterbach will revive the Black Series moniker last used for the 2014 SLS AMG GT Black Series.

A prototype of the hardcore coupe has now been spied undergoing hot-weather testing somewhere in southern Europe while rocking a new hood design. Far more aggressive than what the lesser GT R versions have, the Black Series has giant hood vents hinting at a more powerful engine that requires additional cooling.

In the two GT R models, Mercedes-AMG has dialed the twin-turbo 4.0-liter V8 to produce 577 horsepower, but we know the engine is able to produce 630 hp in the GT 63 S sedan. However, a yet-to-be-confirmed report suggests the engineers from Affalterbach will massage the engine to develop more than 700 hp. The hot rumor from late April comes from someone who claims to have the Black Series on order and has published a document proving he’s patiently waiting for the ultimate GT version.

While we obviously can’t rely on what an unknown person says, Motor Trend did publish an article back in November 2018 hinting at something similar. AMG’s boss Tobias Moers told the publication the Black Series will go after the Porsche 911 GT2 RS and the McLaren 720S, which have 700 hp and 710 hp, respectively. In the same article, MT suggested 750 hp “is certainly within the realm of what’s possible,” so expect the Black Series to pack quite the punch.

The menacing prototype also had a different front bumper compared to the existing GT R versions, along with dual exhaust tips at the corners of the rear bumper. Chances are it did not have all of the final production bits as we think the wing at the back will go through some changes for the Black Series.

When it debuts in 2020, expect the Black Series to command a massive premium over the $200,645 Mercedes-AMG is asking for the aforementioned GT R Pro. The latter is strictly limited to 750 cars, and we won’t be too surprised if the Black Series will be even more exclusive to justify what will surely be an eye-watering price tag.