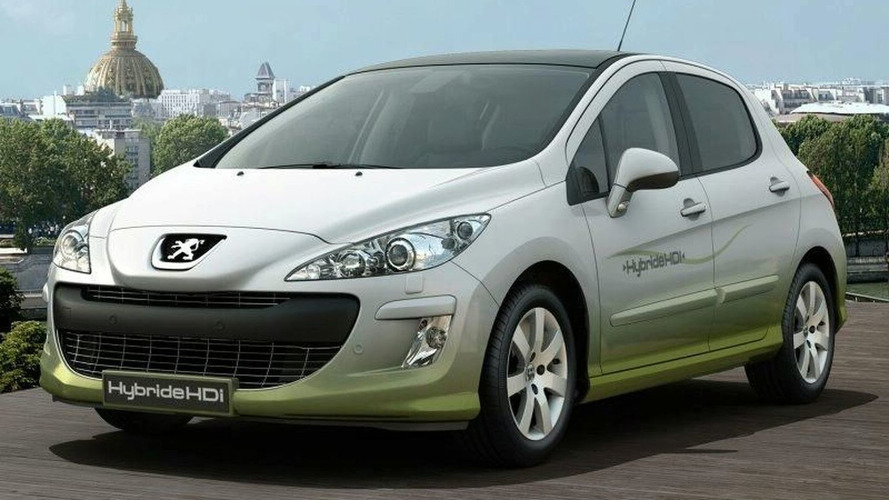 Going green for September's Frankfurt Motor Show will be Peugeot's 308 hatchback with the world premiere of the 308 Hybrid HDi - the firm's second hybrid demonstrator model.

Going green for September's Frankfurt Motor Show will be Peugeot's 308 hatchback with the world premiere of the 308 Hybrid HDi - the firm's second hybrid demonstrator model. Scheduled to enter the market in 2010, the new hybrid continues development on a comerically-viable hybrid drive system, in its present form now capable of 83 mpg on the combined cycle and emissions of only 90g/km of CO2.

Following evaluation of Peugeot's 307 Hybrid HDi, first surfacing in 2006, Peugeot have reaffirmed the choice of a diesel powerplant over petrol as being the most advantageous for reductions in emissions and fuel consumption in further development of the technology.

Now focusing on the commercialisation of the 308 Hybrid HDi, the number of specific parts associated with the 'hybridisation' of the new model has been reduced by 30 percent over its predecessor, while concentration on the hybrid's packaging into the 308's structure and its Euro V compliancy have become key priorities.

With the continued development of powertrains, impressive sets of figures have been ensured for the latest incarnation of Peugeot's Hybrid HDi. Powered by a 110 bhp 1.6-litre HDi engine, coupled with a 22 bhp electric motor and a 6-speed electronically-controlled manual gearbox, the 308 Hybrid HDi is able to trump equivalent models in the 308 range. The latest Hybrid HDi achieves a 38 percent reduction in CO2 emissions over the standard 2.0-litre HDi model, while fuel economy is 63 percent greater on the combined cycle. (To put that into perspective, that's 25 percent more fuel efficient and 15 percent cleaner than a Prius.)

To optimise fuel and emissions efficiency, the 308 Hybrid HDi employs a Power Train Management Unit (PTMU), which electronically adjusts the powertrain modes to the driver's requirements, further reducing fuel consumption, while further features ensure optimised running. When starting and driving at low speeds, the electric motor alone is used, with the diesel engine coming into operation to work simultaneously with the electric motor when further acceleration is required. For open-road and motorway driving, the diesel unit is operated in isolation.

Peugeot have also fitted the 308 Hybrid HDi with a 'zero emissions' mode dubbed 'ZEV', which swiftly shifts the car into all-electric running, producing minimal noise pollution and no emissions, specifically designed for regulated city centres. And to keep drivers up-to-date as to their green driving credentials, Peugeot have fitted the Hybrid HDi multifuction display with real-time schematic diagrams of the powertrain operating mode as well as battery charge status.