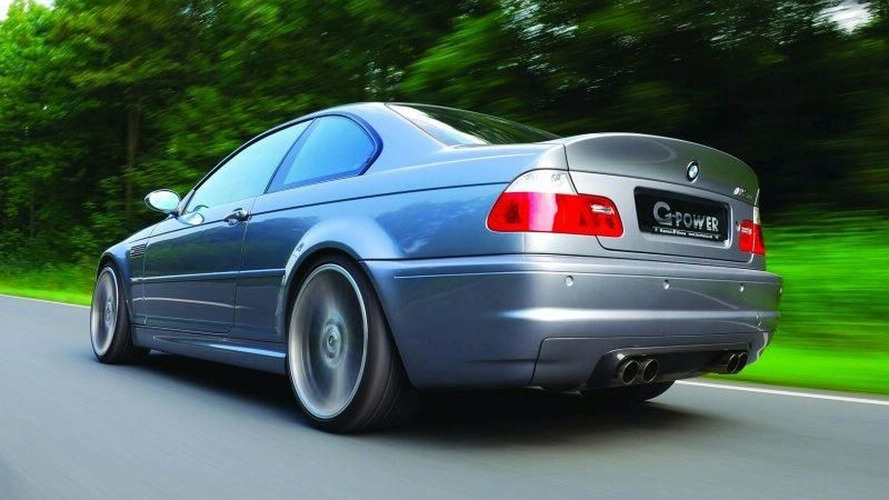 First revealed this past June at the M Drivers Club meeting at the Salzburg-Ring in Austria, BMW tuner, G-Power, has taken the ferocious 5.0L V10 engine from a BMW M5 and transplanted it to a previous generation E46 M3 CSL.

In stock form, the M3 CSL is already quite potent with 360 hp and 370 Nm of torque, however, status-quo is not the way to go for the northern Germany based tuning firm. Despite the added weight of the V10 engine, the power to weight ratio still improves from 3.9 kg/hp to 2.7 kg/hp. The engine conversion alone for G-Power is still not enough as they seduce 43hp more for a total of 550hp and 38 Nm of torque to 558 Nm. 0 to 100 km/h drops from 4.8 sec to 4.2 and 0 to 200 km/h comes in a scary 11.6 seconds. Top speed surges from 285 km/h to 335 km/h. To handle all of that brute power, G-Power turned to suspension manufacturer, KW Automotive, to extensively test and tune the suspension.

Externally, the M3 CSL is unchanged according to G-Power, however, we noticed an additional air intake hole on the passenger side of the front bumper - nice touch nonetheless. G-Power has mounted their concave 10-double spoke Silverstone Diamond wheels pictured here in 21-inch. Despite the added weight from the faux screw fittings which give a two-piece appearance, the Silverstone wheels are in fact lighter than the stock M wheels.

In addition to the E46 3 Series, G-Power offers this V10 engine conversion for the current E91 3 Series Coupe and M3 as well as the Z4 and X5. Currently in development by G-Power is a twin-supercharger kit for the 5.0L V10 engine expected to produce in entry level form 640hp and in further levels up to 750hp. No word yet on model applications for this twin-supercharged kit.