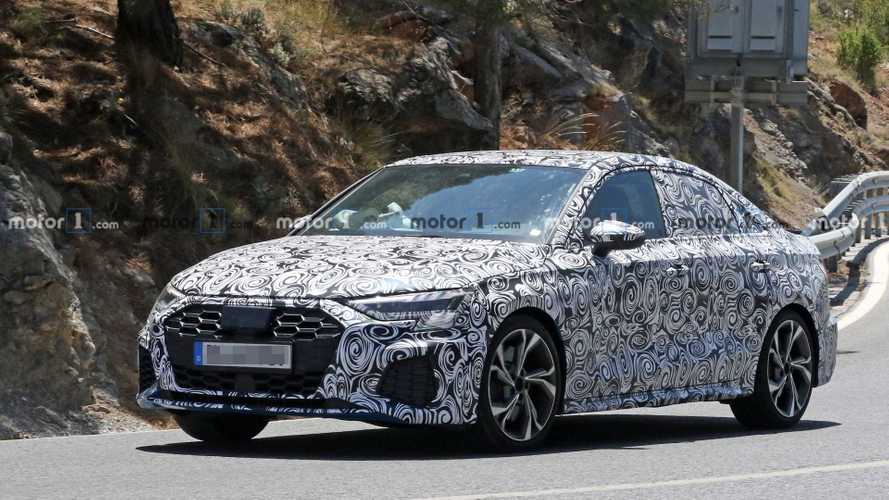 It should have 300 horsepower beneath that camo wrap.

It’s spy photo Tuesday at Motor1.com. Automakers are hammering the streets of the world for mid-summer testing; in just the last 24 hours (as of this posting) we’ve seen the interior for the next-generation Cadillac Escalade, high-definition video of the new BMW M3 and Porsche 911 Turbo attacking the Nürburgring, Smart’s ForFour EV facelift, A Mercedes-Benz GLA rolling through traffic, and our first look at the new Hyundai Elantra. Joining the fray are these sharp images of a camo-wrapped Audi S3 sedan enjoying a few curves in the afternoon sun.

We’ve seen the Sportback running around, but this is just our second sighting of the sedan. To no surprise, it’s adopting Audi’s latest take on its trademark grille, with the opening a bit wider and slightly less gaping. Truth be told, it pretty much looks like the current A4, just a bit smaller overall. That’s rather interesting, considering the current trend among automakers to give everything a “coupe” profile. It’s possible such a machine could eventually arrive, slotting somewhere between the sedan and Sportback, but that’s pure guesswork at this point.

Also falling into the realm of guesswork – albeit well-educated guesswork – is the S3’s power source. A turbocharged 2.0-liter engine not unlike the mill found in the current S3 is highly likely, though it could produce upwards of 300 horsepower (224 kilowatts). Power would obviously go to all four wheels because it’s an Audi, and that's what Audis do.

We’ve only caught a couple S3 prototypes at this point, and they’ve all been seen recently. Usually, that means a reveal is still a long ways off, but we’ve seen other S3 variants off and on since 2018. As such, our intel suggests Audi will launch the new S3 Sedan in Europe early next year as a 2020 model, after the A3’s reveal later this year. A North American release should follow shortly after.