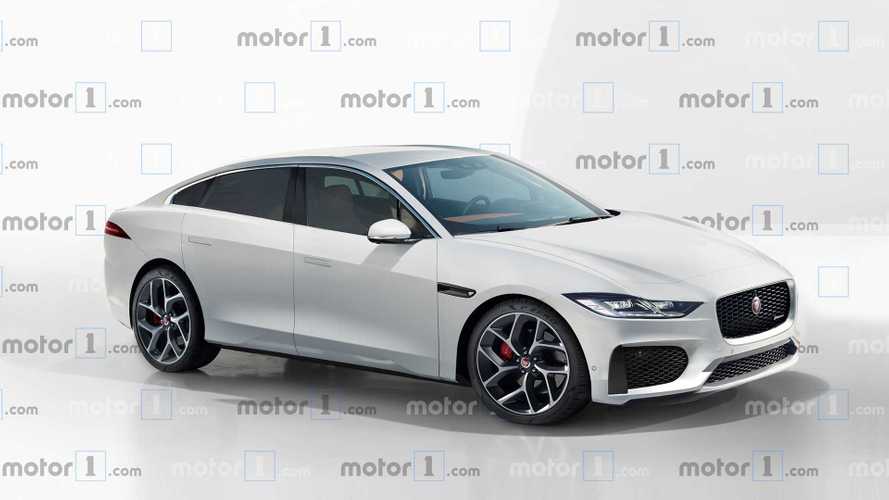 WCOTY jurors also had the opportunity to see the XE and F-Type replacements.

When it comes to new products, Jaguar has a bright future up ahead considering it will refresh nearly its entire lineup from top to bottom. It’s a known fact by now the next-generation XJ will get a pure EV version, and some folks had the privilege of being the first outside of JLR to check out the zero-emissions flagship.

Indeed, jurors of the World Car Award were invited by Jaguar at its Coventry design studios to get up close and personal with some of the automaker’s future products. Probably the most interesting of them all was the all-new XJ bound to replace the previous generation that went out of production on July 5. The car won’t be revealed anytime soon, so it goes without saying there are no official images of the car at the moment of writing.

Jaguar XJ Production To End In July; EV Replacement Due 2020

Jaguar J-Pace Will Electrify Top Of The Lineup

Another sizeable vehicle shown behind closed doors was the J-Pace. The big SUV has been long-rumored, and know we have more proof that it’s in the works to slot above the F-Pace in Jaguar’s SUV lineup. Details about the J-Pace are scarce at the moment, but it’s expected to ride on the same new aluminum-intensive MLA platform as the next-gen Range Rover. The hardware has been developed with electrification in mind, so there’s likely going to be at least one hybrid derivative.

In other news, WCOTY jurors also got to check out the replacements for the XE sedan and the F-Type sports car, the latter of which we’ve spotted undergoing testing several times. Interestingly, Jaguar also briefly talked about the possibility of adding a couple of models at the bottom of the lineup, such as A-Pace and B-Pace, but it’s too soon to say whether these will materialize.

Starting from next year, every single Jaguar available is going to offer an electrified powertrain as the company mentions it will primarily focus on partially electrified and full EVs in the next decade.

After its unprecedented triple win in the 2019 World Car Awards, Jaguar has unlocked the high security doors of its hallowed Coventry design studios and other buildings to give a sneak peak of its premium models for the 2020s and beyond.

The pure-electric I-PACE won the World Car of the Year (WCOTY), World Green Car and World Car Design of the Year titles at a packed New York International Auto Show prize-giving ceremony in April. These wins are the first time in the competition’s 15-year history that a single model has been victorious across three awards categories.

“I cannot tell you how proud I am of all the team involved in creating this car,” Dr Ralph Speth, Jaguar CEO told the jurors at his heavily guarded Whitley, Coventry studios.

“Our decision to create I-PACE started with an idea, two glasses of wine and a clean sheet of paper,” he revealed.

“The team from this produced a consequential designed and engineered vehicle using the freedom of new, pure-electric vehicle technology. The Word Car organisation’s decision to award this 100 per cent-electric model an unprecedented three trophies demonstrates that we are on track to achieving our goal of Destination Zero - that’s a world of zero emissions, zero accidents and zero congestion.”

Despite those highly ambitious aims for the long-term future, Jaguar is not immediately turning its back on buyers who prefer conventional petrol or diesel power. However, in the years ahead the company insists its main focus will be on part-electric or pure-electric vehicles designed and mostly built in Britain - with electronic drive units and battery packs British made, too. Another promise is that there will be “electrified options” for all new Jaguar models from 2020.

Not content with that historic triple win earlier this year, Jaguar is hungry for more World Car Awards trophies throughout the 2020s. It is for this reason that the company took the highly unusual step of allowing in World Car jurors - who are among the first outsiders to see some of the Jags of the future.

Among them are the replacements for the current XE and F-TYPE, the all-new J-PACE SUV, plus the flagship model all-electric XJ which will succeed the combustion version which rolled off the production line for the last time on July 5.

Additionally, considerably less expensive ‘baby Jags’ (possibly badged A-PACE or B-PACE) willing and able to compete for coveted World Urban Car awards in the 2020s have not been ruled out.

Another first at the vault-like Whitley studios was a session involving 150 senior Jaguar employees quizzing their World Car juror guests on how they carry out their high mileage work, assessing and driving hundreds of contender cars on public roads and test tracks in all corners of the world, including Pasadena, Greater Los Angeles, where World Car’s ‘LA Test Drives’ programme takes place over four busy days towards the end of each year.

“Jaguar values modern mobility as a basic right, and environmental protection as an obligation.”

He also talked realistically, enthusiastically and repeatedly about “affordability” being a crucially important factor in encouraging consumers across the globe to buy part-electric or pure-electric vehicles.

And Dr Speth stressed that Jaguar (plus sister manufacturer, Land Rover) are definitely not for sale to Peugeot-Citroen, Fiat-Chrysler, Hyundai-Kia or any other motor manufacturing companies.