Battle of the boxes.

The Suzuki Jimny and Mercedes-AMG G63 have far more differences than they do similarities even though they share the same shape – square and boxy. There’s also a vast price difference, too, yet both bill themselves as competent off-road vehicles. To put their off-road capabilities to the test, Mat Watson at Carwow slipped behind the wheel of the Suzuki and challenged the Mercedes to an off-road race. 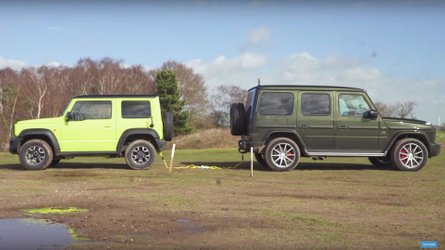 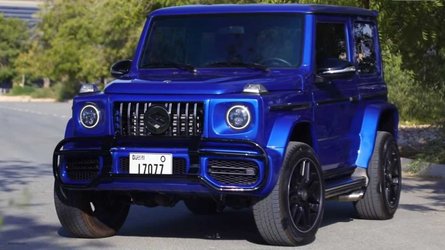 One of the most significant differences between the two makes itself known right from the start – horsepower and torque. The Suzuki packs a tiny 1.5-liter engine making just 100 horsepower (74 kilowatts) and 95 pound-feet (130 Newton-meters) of torque. That’s not even remotely similar to the power output of the G63 with its twin-turbocharged 4.0-liter V8 producing 585 hp (436 kW) and 626 lb-ft (850 Nm) of torque. The G63 gets off the line first, leaving the Jimny to play catch-up. 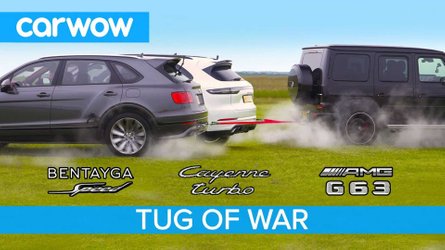 However, once the two SUVs hit the twisty and muddy trails, the Suzuki has no trouble keeping pace. No matter which way the Mercedes turned, descending steep hills or wading through water deep enough to cover the Suzuki’s hood, the tiny yet spunky Jimny stayed within nipping distance of the Mercedes’ rear bumper.

There’s no doubt the Mercedes is far more capable than the Suzuki – as it should be with a price tag nearly 10 times that of the Jimny. It’s heavier, far more powerful, and has even more off-road-ready gizmos. However, taking a six-figure luxury SUV off-road racing is far more nausea-inducing than taking a far cheaper Suzuki off the beaten path. During the race, several tight corners and passes certainly scuffed the paint of both. Taking the Mercedes off-road may require a Xanax to calm the nerves; however, you wouldn’t need anything but pure adrenaline when driving the Jimny.