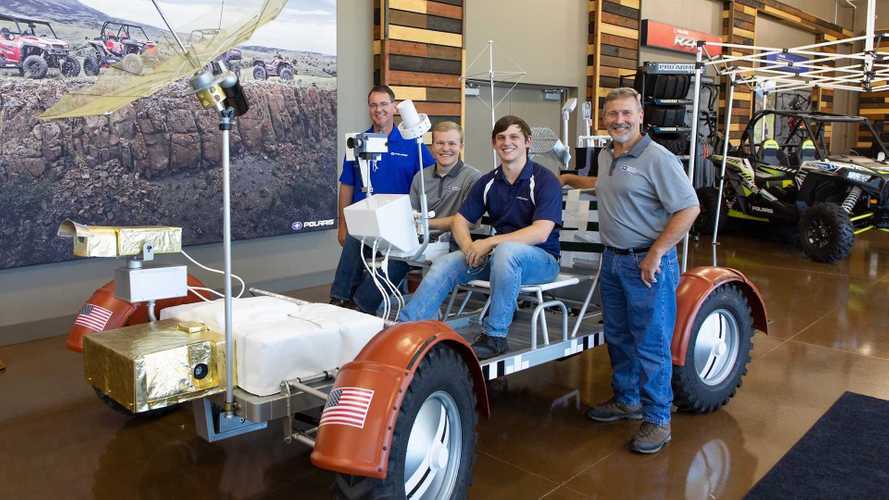 One small step for man...

Has it really been 50 years since man made that giant leap for mankind? The Apollo 11 mission marked humanity's first step on another world, effectively cementing NASA and its astronauts in the annals of history forever. It also showcased how far technology had come, and the space race saw the appearance of the very first celestial off-road vehicle; the Lunar Rover.

In honor of mankind's achievement 50 years ago, Polaris has created a fully-functioning replica of the original Lunar Rover Vehicle (LRV). Polaris collaborated with the US Space and Rocket Center (USSRC) in Hunstsville, Alabama in the creation of this project. Everything on the replica LRV works just like the real one; it has four-wheel Ackermann steering, brakes and accelerates similarly, and was molded out of fiberglass, utilizing the original 50-year old molds that were produced for the space missions. Polaris worked closely with members from the original LRV crew and a NASA astronaut from start to finish, creating a unique and accurate one-off.

Essentially all the mechanical parts of the LRV replica come from Polaris' extensive line of off-road and on-road vehicles, with each piece serving a purpose and function, bringing the project to life. For example, the power steering and electronic brakes come from Polaris UTVs and ATVs. The headlights are taken straight from Indian motorcycles, and things like the steering rack come from the Polaris Slingshot.

“Having the opportunity to honor legends, work with members of the original crew and lend our expertise and technologies to build this Lunar Rover Replica has been incredible,” said Bryan Ogle, manager of manufacturing at Polaris.

From The Dark Side Of The Moon:

The new Polaris Lunar Rover Replica made its first public debut in Huntsville, Alabama at the USSRC Apollo Celebration Car Show on July 13, and is set to appear at many events: