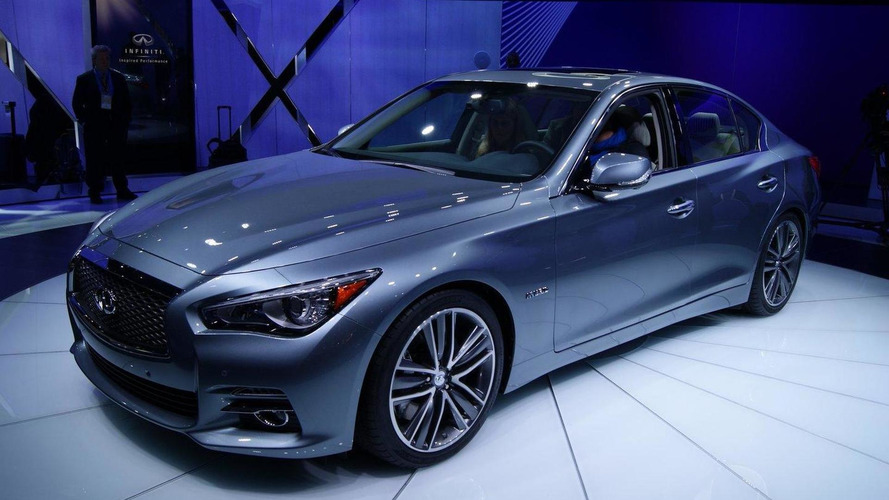 Infiniti has taken the wraps off the 2014 Q50 at the North American International Auto Show.

Infiniti has taken the wraps off the 2014 Q50 at the North American International Auto Show.

Designed to replace the G37, the Q50 adopts an evolutionary design which borrows cues from the Essence concept. Notable highlights include LED-infused headlights, a "double arch" grille and a crescent-shaped C-pillar. There's also a dual exhaust system, an integrated trunk spoiler and 17-inch aluminum wheels.

The cabin has been significantly improved with higher quality materials and a nicer design. Once ensconced in the leather and fabric seat, drivers will find themselves surrounded by a new "double wave" instrument panel that has an asymmetrical design which gives them easy access to all the key controls. Upon closer inspection, they will notice the car is nicely equipped with dual-zone climate control, Bluetooth connectivity and an Around View Monitor. There's also aluminum or maple wood trim as well as a new Infiniti InTouch infotainment system with two capacitive touchscreen displays.

In the tech department, the Q50 is available with a variety of new options including the Direct Adaptive Steering system which enables the driver to change both the steering effort and steering gear ratio. There's also an Active Lane Control system which uses a camera to make minor steering adjustments to compensate for road surface changes or crosswinds. Lastly, the i-Key system enables the car to recognize each driver and automatically engage up to 96 pre-set preferences for everything from the driving position to common navigation destinations.

In the United States, two engines will be available. The entry-level 3.7-liter V6 is expected to have an output of 328 bhp (244 kW) and 269 lb-ft (364 Nm) of torque, while the hybrid variant will use a 3.5-liter V6 engine and an electric motor for a combined output of approximately 354 bhp (264 kW). Additional engine options will be announced later this year, so expect to see a Mercedes-sourced diesel in European variants. Regardless of which engine is selected, it will be connected to a seven-speed automatic transmission which can be paired to an optional all-wheel drive system.

The 2014 Infiniti Q50 will go on sale in the United States this summer and pricing will be announced closer to launch.