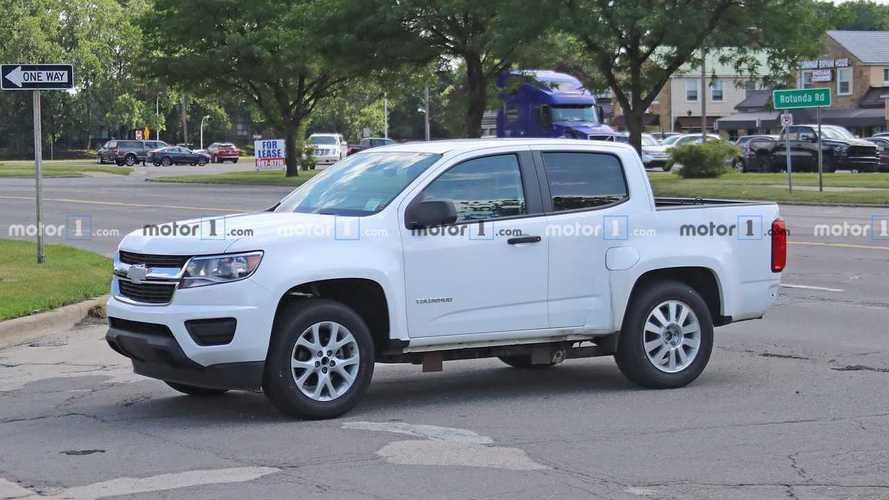 It could be a Bronco test vehicle wearing a Bow Tie disguise, but some things don't add up.

Folks, us journalist types would love to have all the answers, but sometimes it’s better to just drop all the facts and have a big powwow about what the heck we’re actually looking at. These photos came to our inbox today, and at first glance, there doesn’t seem to be much mystery. This is clearly a Chevrolet Colorado pickup truck, albeit some kind of strange test mule with a short wheelbase and a tiny bed grafted onto the back. But it’s so not that simple.

Context matters, and in this case, the context is Dearborn, Michigan. The Motor1.com editorial team includes people who once worked in this area, and we can say with absolute certainty that this strange Chevrolet test mule is actually in the heart of Ford country. The intersection of Greenfield and Rotunda is the traffic light seen in some of these shots, and the prototype is headed into a business park filled with automotive suppliers and official Ford buildings. In fact, Ford’s proving grounds are just a couple miles west, and the Blue Oval’s world headquarters building is barely a couple of miles north. So that begs the question – would Chevrolet actually parade some kind of test mule through Ford’s living room?

The answer is almost certainly no, but let’s take a closer look at the vehicle in question. Clearly it’s been hacked up – the seam where this makeshift bed was fused to the no-longer-functional back doors is plainly visible. The wheels aren’t quite centered in the wheel arches, and suspension components bolted to a full ladder frame are seen beneath the truck. Also, the front and rear wheels are different, and they mount to the truck with five lug nuts. That last bit is important, because the Colorado uses axles with six lug studs. The plot thickens!

Could this actually be a Ford Bronco test mule, wearing a Chevrolet body for the ultimate camouflage? Possibly, and the weird shorty bed with a short wheelbase is similar to what we’ve seen on previous Ford-based test vehicles. However, those mules also have six-lug wheels, so this may not be a Bronco in disguise after all. Our source on these photos also points out this truck is missing a certain windshield sticker usually seen on Ford prototypes, suggesting the automaker may have nothing to do with this. Lastly, this mule was headed towards a supplier in the area known for testing non-Ford products at the Blue Oval’s proving grounds.

So, is this a Bronco test vehicle using five-lug axles? Is it related to the so-called baby Bronco? Is it something completely different, perhaps unrelated to both Ford and Chevrolet? Such cobbled-together machines aren’t that uncommon around the Motor City, but seeing a Chevy-badged test vehicle in Dearborn certainly garners attention. Let’s discuss.