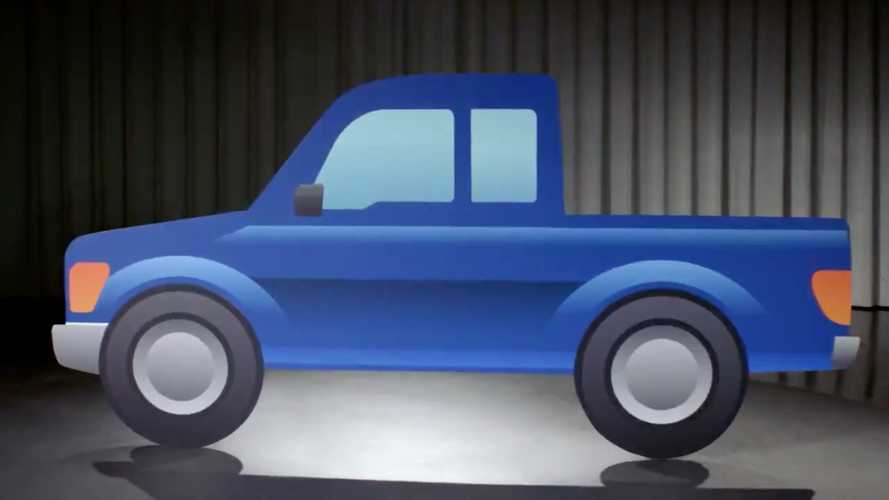 Yeah, this is weird.

UPDATE 2: Ford has officially unveiled that the thing it was teasing wasn't an actual truck but instead a pickup emoji as part of World Emoji Day. Check out the debut video below.

UPDATE: Ford now has a teaser video (below) that doesn't fully reveal the vehicle but shows an ultra-boxy pickup, in addition to lots of circles. Maybe the Blue Oval is building a tiny F-150 for kids in the style of a Little Tykes car but with a cargo bed. Alternatively, commenters on Twitter speculate the company might make a special F-150 emoji, possibly in connection with some of the new features in the upcoming release of Apple's iOS 13 software.

Mike Levine is Ford North America Product Communications Manager, so he knows what's on the way from the Blue Oval. In a trio of recent tweets, Levine points to big truck news coming later this week. His info suggests something is happening to the Ranger lineup, and he alleges there aren't spy shots of the vehicle yet.

Assuming that Levine is correct that spy shots of this vehicle don't exist, then we have to rule out this being the much-anticipated Ranger Raptor. Photos (below) catch the performance-oriented model's development. Rumors point to the model packing a 2.7-liter turbocharged V6 and sporty parts like an improved suspension, extra skid plates, and better brakes.

Rumors point to the Ranger possibly getting a diesel engine in the United States, although there are also spy shots of its possible development. The powerplant is likely a version of the 2.0-liter turbodiesel from Europe that makes 130 horsepower (97 kilowatts) with a single turbo or 210-hp (157-kW) with two turbos. The company offers them with a 10-speed automatic or six-speed manual. Introducing the new powerplant would give the Ranger a competitive model against the diesel versions of the Chevrolet Colorado, GMC Canyon, and a forthcoming variant of the Jeep Gladiator.

Check Out The Potential Future For The Ranger:

Expand your mind a little and really think about Levine's statement, "if you like small trucks you won't be disappointed." It makes us wonder if Ford might create a two-door, regular cab version of the Ranger. The company already offers the SuperCab body with two doors and four seats. The second row is pretty tight, though, so removing them entirely would allow for fitting a longer bed without changing the overall body length.

If we really want to speculate, don't rule out that the upcoming announcement could have to do with Ford's upcoming Focus-based pickup.