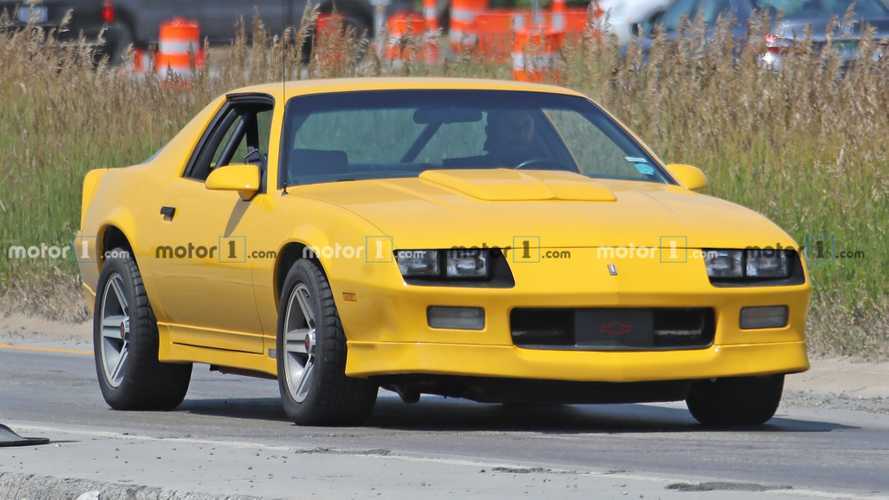 The vast majority of photos we receive from our spies are of future products being tested before their official release, but every now and then, we do get an interesting batch such as this one. The third-generation Camaro went out of production back in 1992, so why has it been spotted at the GM Proving Grounds? For what it’s worth, it had a manufacturer license plate and a sticker on the windshield granting it permission inside the test facility.

That still doesn’t explain why Chevy was testing a car that was retired 27 years ago, but our spies did notice something quite interesting. After starting to follow the Camaro, they listened closely to its shift pattern and came to the conclusion the vehicle had a six-speed manual gearbox. Back in the day, the car was available with transmissions like a five-speed manual and a four-speed auto, but certainly not in a six-speed three-pedal setup.

As for the engine, our spies have informed us the mysterious car likely had a small block V8 hiding underneath that prominent hood bulge. It had quad exhausts at the back and a roll cage inside the cabin, so definitely not your run-of-the-mill Camaro from 1982 to 1992. Perhaps the biggest clue revealing the true identity of the car is behind the front wheels and on the rear bumper where we notice the vehicle had GM Performance Parts badges.

One could assume it was being used as a testbed for future products available from the General Motors Performance Parts catalog. There might be something going on with the suspension as well taking into account the Camaro appears to be sitting slightly higher to the road than what we’re used to seeing from this generation.

Whatever GM is testing with this somewhat unusual prototype, this unexpected set of spy shots is a good opportunity to realize the third-gen Camaro’s styling has aged gracefully. As for the car’s future, it’s up in the air as some rumors say Chevy will axe the Camaro altogether in 2023 while other suggest it will die and then come back as an EV.

The Camaro's Future Is Uncertain: