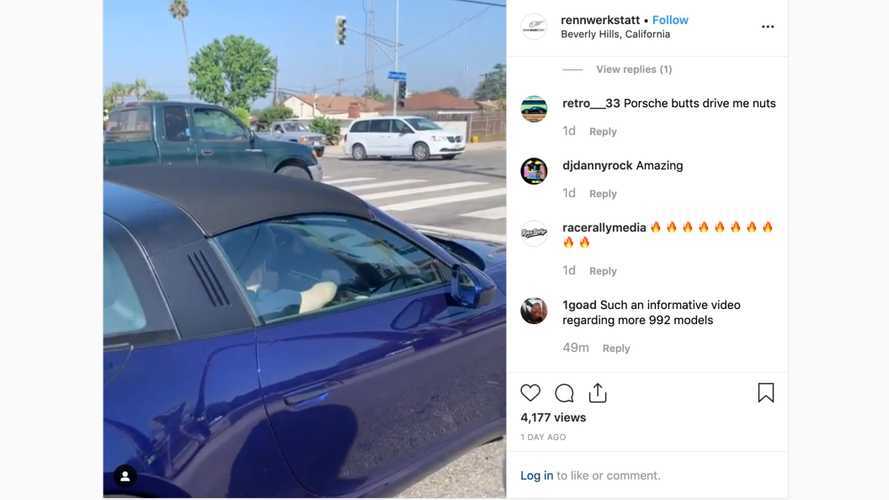 The new 911 Turbo Cabriolet is briefly visible, too.

You can see some odd things at a traffic light like a next-gen Porsche 911 Targa sitting alongside the upcoming 911 Turbo Cabriolet. Neither of them the vehicles are wearing much camouflage, despite driving around on public roads.

This clip is brief but provides enough of a view of the Targa to see some of the details. The tail wears only marginal camouflage around the corners of the taillights. The need for this concealment is unclear, though, because the styling looks the same as the standard Carrera model. The exhausts are slightly different by using trapezoidal outlets rather than the Carrera's circular exits.

Check Out The Previous Spy Shots Of The New 911 Targa:

The rest of the car doesn't show any obvious camouflage, but the roof is in place. Judging by the visible cut lines, it appears that the top retains the existing version's complicated mechanism where the entire rear deck lifts up to make room for the roof section (see below).

The powertrain for the Targa is almost certainly the same as the Carrera. The current S model produces 443 horsepower (330 kilowatts) and 390 pound-feet (529 Newton-meters) of torque. The complicated roof likely adds some weight, so reaching 60 miles per hour (96 kilometers per hour) probably takes longer than the Carrera S' 3.5 seconds.

The debut date for the new 911 Targa is a mystery, but Porsche has a whole lot of variants of its iconic sports car yet to put on sale. For example, the 911 Turbo and Turbo Cabriolet are still to come, and spy shots show that the new 911 GT3 is deep into development. They add up to a whole lot of 911s arriving in the months to come.