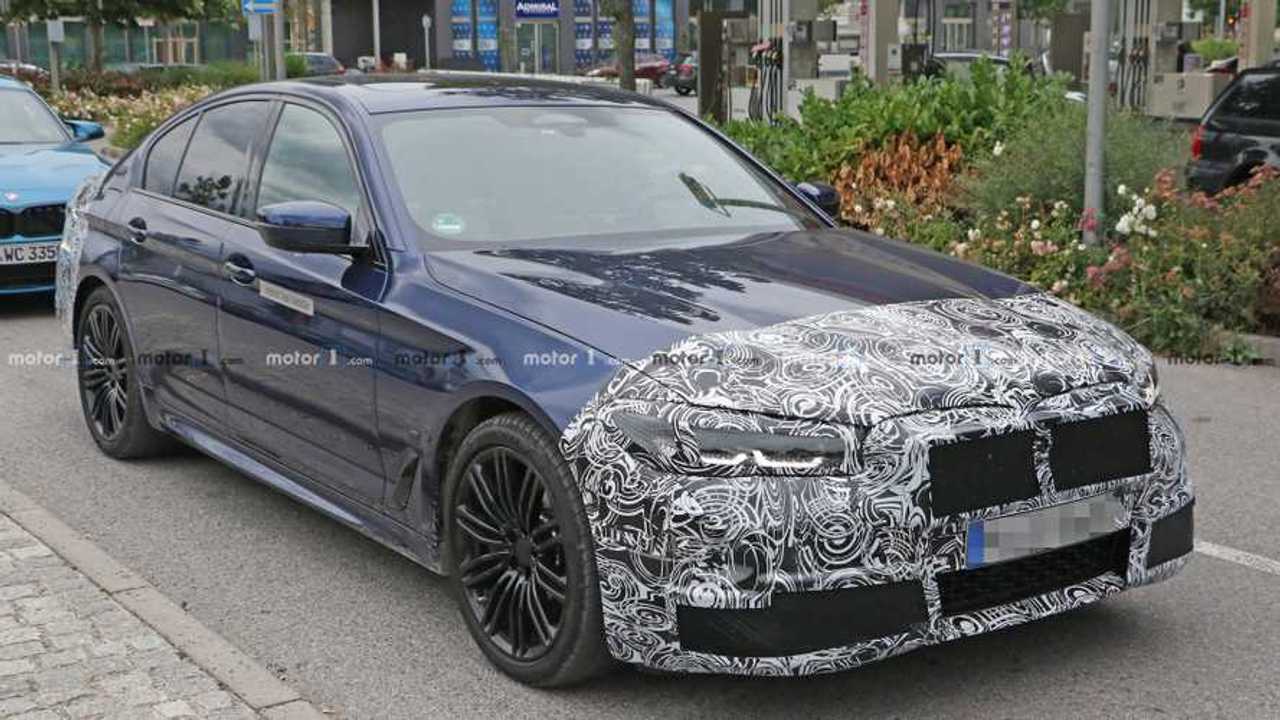 Hot on the heels of last week’s images of a BMW 5 Series wagon facelift prototype, a new batch allows us to check out the sedan out and about testing its mid-cycle refresh. As it was the case with the previous set of spy images, we’re looking at an electrified version of the 5er as denoted by the “Hybrid Test Vehicle” sticker on the front doors and rear bumper. Look closer and you’ll see the eDrive badge on the rear pillar like it’s the case with the current 530e.

How do we know it’s the facelifted version? The headlights have a fresh LED daytime running lights signature akin to the latest 3er, while the taillights also appear to be featuring slightly different graphics. Tiny black rivets on the front fascia denote the entire bumper is camouflaged with extra paneling, including the area around the corporate grille. A question arises – will the kidney grow in size? Probably.

The blue brake calipers and the M badge hiding beneath a black tape on the front fender reveal this is actually an M Sport model with a series of sporty upgrades. The extensive camouflage at the rear leads us to believe the bumper will be going through some changes, but not as drastic as the disguise might suggest.

We can’t quite see what’s going on inside the cabin, although it’s safe to say the latest and greatest digital instrument cluster and iDrive infotainment system will be implemented in the entire 5 Series LCI lineup. That will obviously include the 530e, although some are suggesting the name will be bumped to 545e to reflect the updated powertrain inherited from the 745e.

BMW Is Updating The 5 Series:

That being said, we’re not entirely sure BMW will make this change seeing anytime soon as how the 530e xDrive sedan is only being launched this summer to join its rear-wheel-drive counterpart. Also this season, the electrified 530e models with their 248 horsepower and 310 pound-feet (420 Newton-meters) of torque output are getting the latest battery cell technology for extra electric range, along with the implementation of acoustic protection for pedestrians as standard equipment.

We wouldn’t hold our breath for a reveal in the coming months taking into account the Life Cycle Impulse for the BMW 5 Series is likely due at some point in 2020.