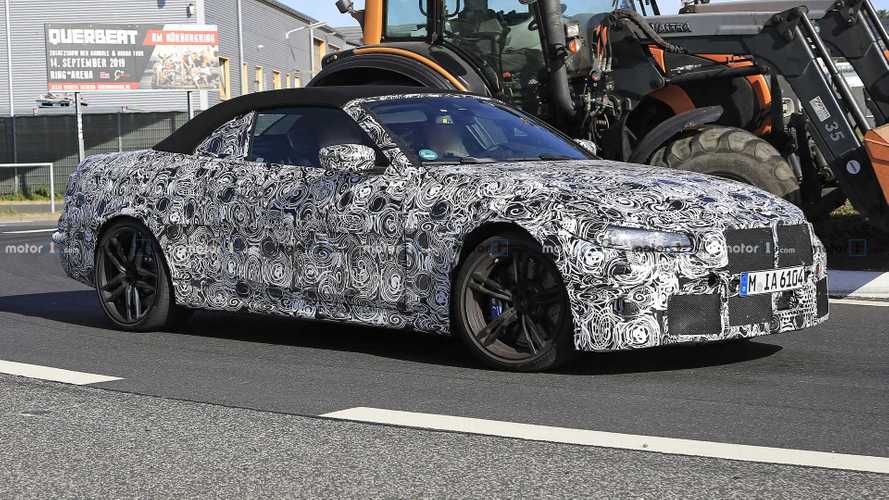 The engineers still appear to be working on the final body design, particularly at the rear.

[UPDATE, July 10] Eight new images have been added at the beginning of the gallery, below.

After seeing a whole lot of spy shots of the upcoming BMW 4 Series Cabriolet, we are finally getting a look at the M4 version of the droptop. This one is driving in the vicinity of the Nürburgring, although not on the famous track. We expect to see it lapping the Green Hell soon, though.

There still aren't fully undisguised images of the standard 4 Series Cabriolet, so seeing what's different here is a challenge. While not readily visible here, we would expect the M4 to have a similar front end as the regular model but with aggressive touches like larger inlets in the fascia.

The rear end appears unfinished because of how exposed the exhausts are. On the final vehicle, expect there to be a diffuser between the pipes for hiding the bulk of the muffler.

Recent reports indicate that the new M3 and M4 share a 3.0-liter twin-turbo inline-six engine. It'll produce 473 horsepower (352 kilowatts) in the standard trim, and the hotter Competition version will push the output to 503 hp (375 kW). Transmission options will reportedly comprise a seven-speed dual-clutch automatic and a manual gearbox. There are rumors of the vehicles using all-wheel drive, but it might be an option, rather than a standard feature.

The new M3 and M4 will allegedly debut by mid-2020. However, this date will likely only be for the hardtop versions. The M4 convertible will probably arrive a little later to give the fixed roof models their time in the spotlight.