Quad exhausts will never get boring.

It was only yesterday when our spies sent an e-mail with the latest batch of images depicting the next-generation Volkswagen Golf GTI and now we have received a new set of spy shots with another compact hot hatch from the VW Group. It’s the revamped Audi S3 Sportback or the fancier version of the VW Golf R as we like to call it, caught here carrying what looks to be the full production body and lights. 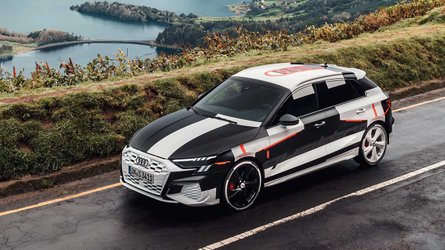 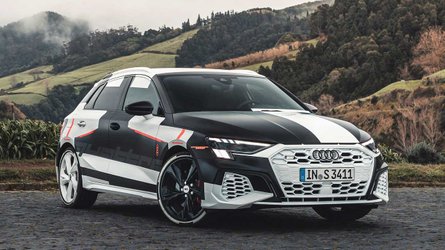 The mascara can’t hide the fact Audi will only give the A3/S3 a subtle styling evolution over its predecessor, which isn’t all that surprising considering how VAG handles design. We can already observe the headlights will be brought in line with other recent models that carry the Four Rings, while the generous air intakes in the front bumper denote it’s the S3.

Of course, the telltale sign we’re dealing with something more exciting than a regular A3 Sportback is at the back where the prototype was flaunting quad exhausts. They don’t look particularly pretty, but that’s probably because the test vehicle did not have those nice exhaust finishers, while the diffuser between them was also missing.

While the S3 Sportback is unlikely to set foot in North America, Audi fans with an appetite for a compact-sized performance vehicle can take comfort from knowing the new S3 Sedan is expected in the U.S. alongside the hotter sedan-only RS3. In other parts of the world, there will also be an RS3 Sportback, but we wouldn’t hold our breath in regards to the chances of seeing it in the U.S. of A.

Going up against the Mercedes-AMG A35 and the recently introduced BMW M135i, the new Audi S3 will allegedly get a minor bump in power as reports are indicating it could pack somewhere in the region of 325 horsepower or nearly 30 extra ponies compared to the outgoing model. Quattro all-wheel drive is a given, and so is an automatic transmission to handle power delivery from the turbocharged 2.0-liter engine to both axles.

Audi will probably unveil the regular A3 Sportback in the months to come, which means the hotter S3 is earmarked for a 2020 release. If that’s the case, expect it in the United States as a 2021MY.