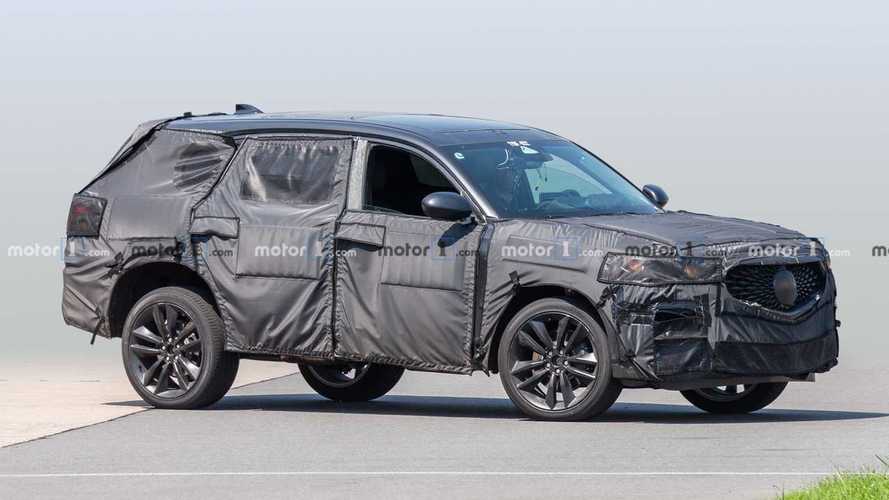 The quad exhaust pipes are clearly visible, too.

The last time we saw the new Acura MDX Type-S it was early in 2019, wearing heavy camouflage. Actually, we should clarify that further by stating it was wearing really heavy camouflage, because this new sighting shows a prototype with nearly every square inch covered. The thick wrap is curiously free from the grille, which at least helps us better identify this as an Acura MDX.

As for the rest of the SUV, details are still very well guarded though we can spot a few tidbits. This prototype appears to have production-spec headlights beneath the covers, or at least, something a bit less bizarre than the strange placeholder lenses we saw on the previous test vehicle. We can also see a bit more of the central air intake on the lower fascia, and combined with the mostly visible grille, it appears this people mover will wear a very familiar face.

How do we know this is a Type-S? Nothing is confirmed at this point, but the quad exhaust outlets at the back along with some sizable rubber at all four corners suggests this SUV has a bit more gumption under the hood than the typical MDX. The exact measure of that power isn’t yet known, though we’ve heard it should come from a turbocharged V-6 that will be the exclusive domain of Acura. The current MDX offers either a 3.5-liter V6 or 3.0-liter in the Sport Hybrid model, both without any forced induction.

Acura recently took a tweaked MDX Sport Hybrid to Pikes Peak, festooned with a 400-horsepower powertrain that married a modified version of the 3.5-liter engine to the hybrid’s three electric motors. As cool as that might be for the Type-S, logic says a more traditional approach will befall the production SUV. Also, the rumors about a turbo V6 seem rather stout, and a force-fed version of the 3.5 turning all four wheels could certainly have potential.

Those rumors also suggest that, despite the thick coverings, we could be just six months out from a full reveal of the 2020 MDX Type-S. If that’s the case, look for more revealing prototype sightings coming soon.