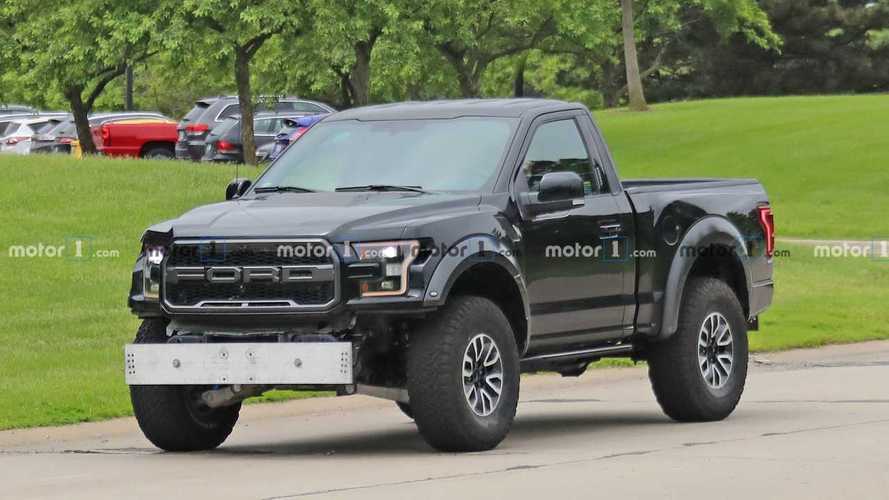 The Ford F-150 may follow in the tread marks of its larger F-Series Super Duty sibling in offering a Tremor off-road package, according to a new report by Ford Authority. The Blue Oval enthusiast site claims that a recent single cab, short-bed F-150 mule with Raptor-like cues our spy photographers spotted is actually a testbed for the Tremor.

Positioned below the Raptor but on top of the FX4 Off-Road package in the F-150's off-road-ready hierarchy, the Tremor is likely to bring off-road kit such as a raised suspension, additional underbody protection, the Raptor’s trail-control system, and more to the table. Whereas the Raptor relies on a 450-horsepower twin-turbocharged 3.5-liter V6 for motivation, the Tremor may instead use one of the F-150s more mundane powertrains, such as its 290-hp naturally aspirated 3.3-liter V6 or 325-hp twin-turbo 2.7-liter bent-six. Such a combination would place the F-150 Tremor in the crosshairs of competitors like the Ram 1500 Rebel and Chevrolet Silverado Trail Boss. Both cross-town rivals offer formidable off-road capabilities and tough looks that fall a wee bit short of the performance of the and trophy-truck-like styling of the F-150 Raptor.

While an F-150 Tremor makes perfect sense to us, Ford Authority reports that the package’s production possibilities remain up in the air. Furthermore, the site notes that the Blue Oval may forgo offering the Tremor on the current F-150, and instead hold the model for the next-generation pickup. When reached for comment about the possibility of an F-150 Tremor, a Ford spokesperson informed us the company doesn’t “speculate on future products.”

Only time will tell if Ford adds a rock-crawling Tremor trim to the F-150 model line. For now, we’re just glad the brash F-150 Raptor continues to exist.