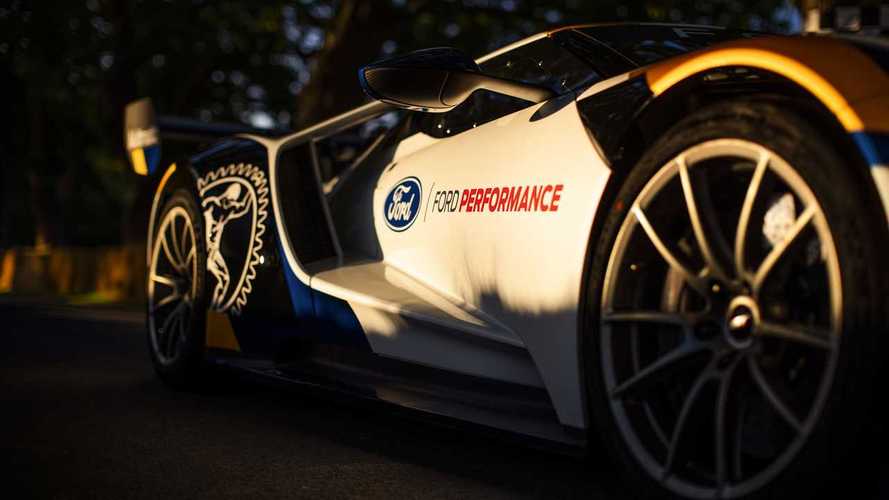 Don't like the color combo? Better get used to it.

Update: A previous version of this story indicated that the GT Mk II is only available in the livery featured at the Goodwood Festival of Speed and in the gallery below. This is incorrect. All Ford GT Mk IIs will be delivered in white. The story has been updated to reflect this correction.

The weekend is over and with that, this year’s Goodwood Festival of Speed is now a thing of the past. The annual hill climb race in West Sussex, England, gathers some of the coolest cars in existence and also marks the first public appearances of new exotics. The 2019 edition of the event stayed true to its roots and hosted the debuts a few awesome vehicles, including Ford’s swan song to the GT supercar, the GT Mk II.

The press photos of the machine showed an example, one of only 45 to be made, with a somewhat untraditional color combination. The livery highlights Multimatic’s (Ford’s motorsport partner) input in the project and fuels our imagination of what a different, all-white exterior finish would look like. Thankfully, FordAuthority was toying with the same idea and decided to contact the automaker for more details.

All You Need To Know About The GT Mk II:

It turns out that the livery of the new GT Mk II is not just stickers but it's painted on the body. Apparently, that’s a good thing if you like the looks – you won’t have to worry about peeling decals on your $1.2-million supercar. But for those of you who don’t like the livery, this is bad news – you’ll probably have to respray or wrap the entire car if you want to change the appearance

In an era where most performance vehicles use some sort of electrification, Ford’s most expensive new car ever sticks with a 3.5-liter EcoBoost V6 engine tuned to deliver in excess of 700 horsepower (522 kilowatts) or 200 more horsepower (149 kW) than a GT Le Mans racer.

In addition, intensive body modifications increase the downforce by about 400 pounds (181 kilograms) compared to the race model and reduce the curb weight by approximately 200 lbs (91 kg). Not only that, but the supercar can pull 2.0 Gs while cornering. Do we still care about the livery? Nah.