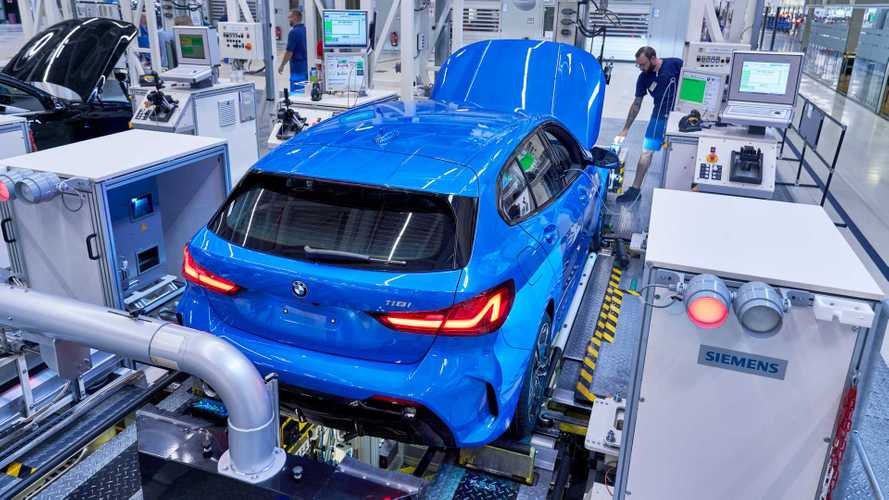 The very first car is this blue 118i with the sport package.

BMW has been quite a lot in the news lately as the company is refreshing its portfolio across the entire spectrum, from the base 1 Series to the facelifted 7 Series, plus that wild X7 pickup truck one-off. The German automaker introduced a completely new, front-wheel-drive-based 1er at the end of May, and now it has kicked off series production of its Mercedes A-Class and Audi A3 rival.

Built at the Leipzig factory in Germany, the revamped 1 Series follows the first- and second-gen rear-wheel-drive generations of the compact hatchback and is just one of the eight models assembled at the plant. At the same facility, BMW puts together the 2 Series Coupe and Convertible, along with the hotter M2 Competition and the family-oriented 2 Series Active Tourer minivan. On top of these regular models, the electric i3 and plug-in hybrid i8 coupe and roadster are also built in Leipzig. In total, the production volume reaches an impressive 1,000 units per day.

In the coming months, BMW expects to ramp up daily production of the 1 Series to approximately 600 units. The very first car assembled for a customer is an entry-level 118i finished in blue and equipped with the optional sports package heading to a client from Italy. Leipzig won’t remain the sole manufacturing facility for a long time as the model will also at the assembled at the Regensburg plant from November this year.

Also from November, the Leipzig factory will kick off production of a ninth model – the 2 Series Gran Coupe. Essentially a sedan version of the 1 Series hatchback, the model will come to the United States to rival the Mercedes CLA.

Replacing the second-gen 1 Series built in 424,111 examples since its production start in March 2012, the 2020 BMW 1 Series will top out with the xDrive-only M135i hot hatch. However, recent reports are indicating BMW has plans for a beefier version with close to 400 hp in order to fight the recently launched Mercedes-AMG A45 / A45 S.

The 1er In The News: