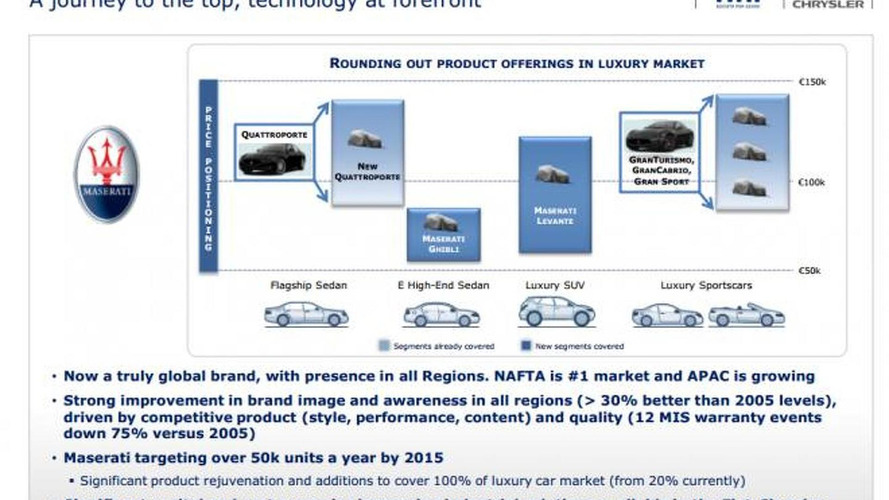 Fiat has revealed new details about Maserati's future product lineup. It includes the previously announced Ghibli, Levante and Quattroporte as well as an all-new Gran Sport.

As part of €1 ($1.3) billion investment, the company will launch an entry-level Ghibli, a new Levante crossover and a redesigned Quattroporte. The company will also introduce an all-new GranSport as well as replacements for the GranTurismo and GranCabrio.

The Quattroporte will debut at the North American International Auto Show and have a base price of approximately €80,000. The Ghibli will be unveiled a few months later, but start at roughly €55,000.

In 2014, Maserati is expected to introduce the Levante which costs approximately €60,000. Recently previewed by the Kubang concept, the Levante will be based on the Jeep Grand Cherokee but have unique styling. The slide also reveals the model will be built in Italy which contradicts earlier reports that said it would be made in Detroit.

2015 will likely usher in the next-generation GranTurismo and GranCabrio. Little is known about the models, but styling boss Lorenzo Ramaciotti recently revealed they will be smaller than the current models.

Last but not least, the slide confirms rumors of a GranSport revival which will likely come to market in 2016. Expected to be based on the Alfa Romeo 4C, the GranSport will battle the Porsche 911 and be available with a V6 or V8 engine.