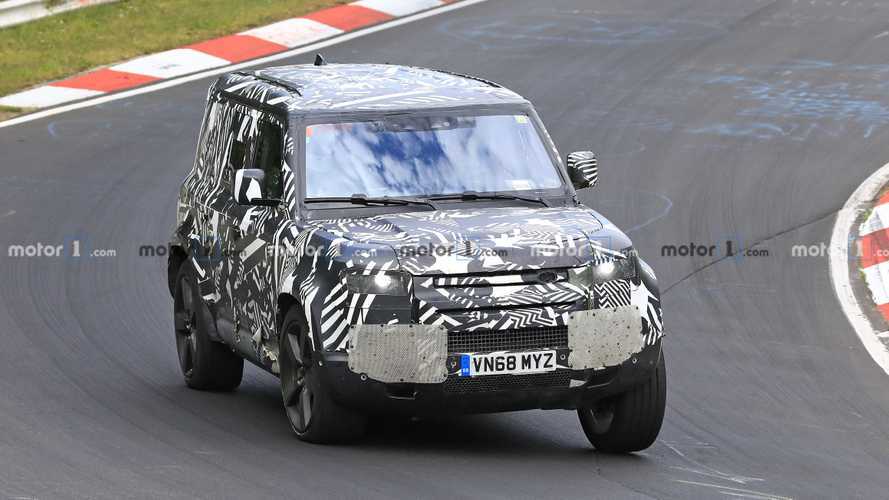 The chunky body cladding is gone, revealing softer edges on the hood and roof.

Even the Land Rover Defender isn’t immune to the high-speed charms of the Nürburgring. The latest batch of Defender spy photos shows the chunky off-roader leaning into the Little Carousel towards the end of the Nordschleife loop, and it’s wearing a bit less camouflage to boot. You’ll notice it’s not quite as square as some other models we’ve seen – clever cladding on the hood and roof of previous prototypes hid the Defender’s rounded edges, but we get a good look at such things here.

This is a four-door 110 model, and though we are seeing rounded edges and low-profile tires, the Defender should still be a capable machine outside the confines of pavement. Actually, it should be quite capable on- and off-road with its new independent suspension, though we suspect Defender purists will have a hard time accepting the layout. One thing is for certain – it seems to cope quite well with on-track duties, though we have doubt about any Defender customer being interested in such things.

Defender purists might also be wary of the 2.0-liter turbocharged diesel that’s expected to reside beneath the hood. It should provide plenty of low-end power, but its smaller size doesn’t exactly fall in line with the pedigree of the Defender moniker. We say these things not to detract from the new model, but rather as a sign of the times. From what we’ve seen thus far, this reborn Defender seems just as capable if not more so compared to its predecessor, while also offering better on-road manners and decent fuel economy. What's not to like there?

Ultimately, we’ll have to reserve final judgment on the new Defender until we get a chance behind the wheel. A Defender prototype will be running at the 2019 Goodwood Festival of Speed, but the off-roader won't shed all its camo until September with an appearance at the Frankfurt Motor Show. Sales in Europe are slated to begin in early 2020, and yes, it's coming to America later next year.