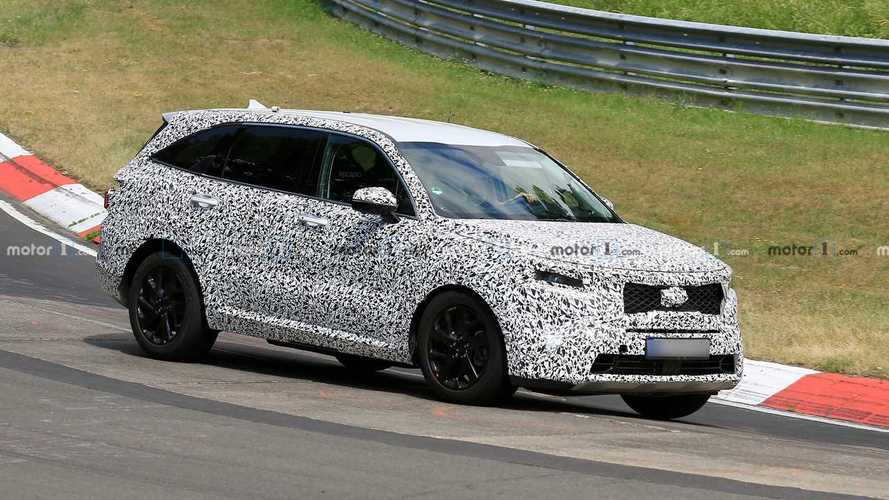 It's full-speed ahead at Kia for the next-gen SUV, literally and figuratively.

The Kia Sorento received a minor facelift for the 2019 model year, but as we all know, time moves very fast in the SUV/Crossover realm. We spotted our first prototype for the next-generation Sorento just last month, carrying heavy camouflage coverings on the sides and rear. That alone is something when you consider the facelift is still fresh, but now we have a second Sorento sighting at the Nürburgring, and it’s already dropped the heavy camo for a tight swirl body wrap.

Spy Video Is Out:

What do these new spy photos reveal about the next Sorento? While it will be an all-new offering as opposed to a refresh, it will be a familiar sight to current Sorento owners. The overall proportions look the same, and the distinctive C-pillar shape is easily seen now that the heavy covers are gone. We can also see the curved side glass that takes a familiar bite out of the D-pillar, but if you look closely at the beltline, it angles upward at the rear on this prototype. The current Sorento’s trim curves down ever-so-slightly.

At the rear, we now see a completely new liftgate and lower fascia. The taillights are obviously generic placeholder units for testing, but the camo wrap is completely cut out around the mounting areas, revealing what could be the shape for new taillights. If this is the case, the Sorento will ditch its horizontally oriented lenses for something rather squarish. We have no concrete info on engines and interior components at this time, though rumors have reached us that Kia will offer various hybrid powertrains.

With the current Sorrento still fresh from its facelift, and with only a couple next-generation Sorento prototype sightings under our belt, the new model should still be a year away at least. The covers will probably lift late in 2020 as a 2021 model.