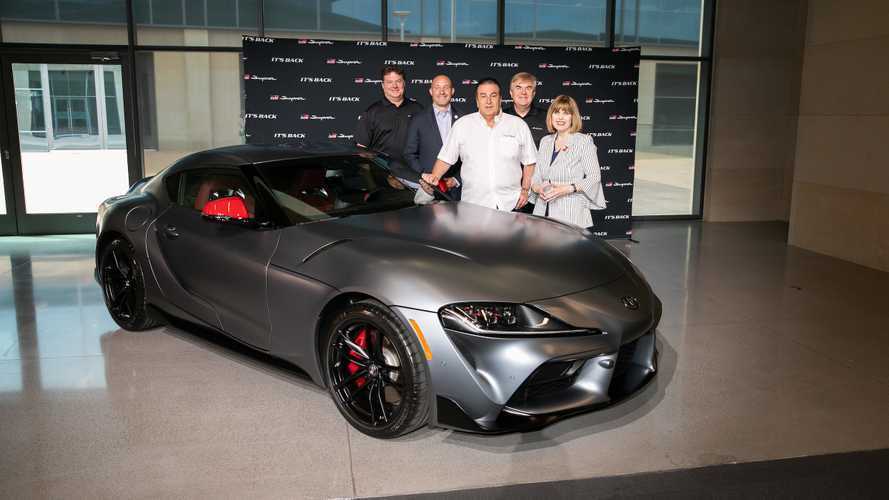 The sports car is finally making its way into public hands, though this one is quite special.

$2.1 million dollars is a lot of money for anything, save perhaps a nuclear-powered aircraft carrier. Never the less, that’s the sum that went down on the table back in January at the 2019 Barrett-Jackson auction in Scottsdale for the car pictured here. It’s a 2020 Toyota Supra, but of course, there’s a bit more to it than that.

Toyota Supra May Be More Powerful Than The Company Claims
⠀

This Supra has a couple distinguishing features, not the least of which being its VIN. The last five digits read 20201 – indicating the car’s model year and its status as the first production unit off the Supra’s assembly line in Austria. Generally speaking, owning the first of any car makes it special. Given the immense pent-up demand for the storied sports car’s return, having the very first Supra built for the public is indeed special.

That’s not all the $2.1-million winning bid bought, however. This Supra is the first of the Launch Edition models, which get special badging and red mirror caps. However, eagle-eyed followers of the new A90 will note the exterior shade of Phantom Matte Gray. This color is not among the Launch Edition choices, making it a true one-of-one vehicle. Special extras like a Toyota racing suit and a photo signed by Toyota President Akio Toyoda were also part of the purchase, and of course, all the cash went to charity.

Our Take On The Supra:

The buyer for this special Supra is noted automotive dealer guru John Staluppi, who owns a Toyota dealership among his many automotive holdings. His plans for the sports car are unknown, though we suspect this car parked in a Toyota showroom would bring potential customers through the doors for a look-see. Whether or not it ends up being a smart investment remains to be seen – the new Supra isn’t without its share of detractors, with more than a few Toyota purists upset over BMW’s large role in developing the car’s powertrain. We’ve spent time in the new Supra and it’s simply fantastic, so as time moves on we suspect opinions will shift in favor of the Toyota’s effort.

Toyota dealer John Staluppi took possession of “Global #1,” the first 2020 GR Supra to roll off the production line, at the company’s Plano headquarters on Monday.

Staluppi paid $2.1 million for the fifth-generation Supra in January at the Barrett-Jackson auction in Scottsdale, Arizona.

“Global #1” is the only VIN that will end in 20201 – with “2020” representing the year the Supra was reintroduced to the world and “1” marking it as the first vehicle to roll off the production line. The exterior is factory-finished with a matte gray exterior, red mirror caps and matte black wheels. The red interior is accented with carbon-fiber inserts. The car represents the first of the launch edition for the U.S. market.

Staluppi also received several other goodies from Bob Carter, Toyota executive vice president of sales, when he picked up his car, including a Toyota racing suit and a signed photo from Toyota Motor Corporation President Akio Toyoda. Toyoda signed the #1 Supra’s engine cover to commemorate the first Supra produced in 20 years.

Proceeds from the auction will benefit the American Heart Association and the Bob Woodruff Foundation, which serves veteran and military families.