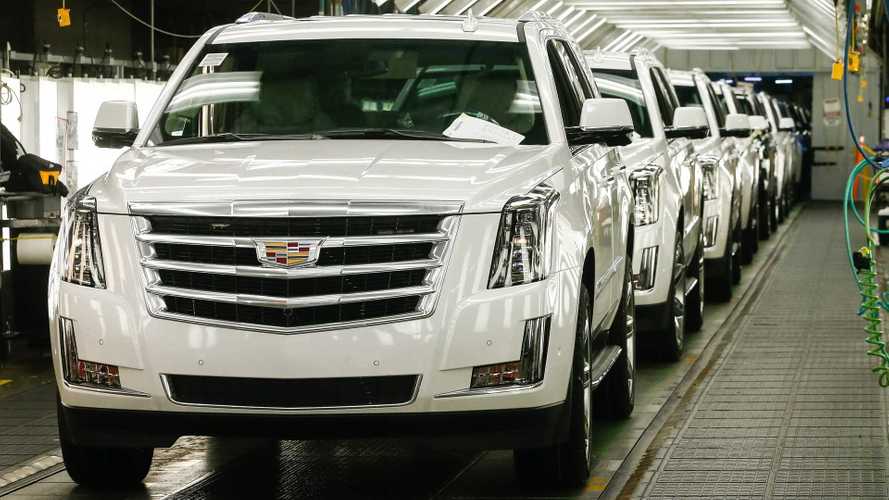 The plant will soon be building next-gen examples of models like the Cadillac Escalade and Chevrolet Tahoe.

General Motors will invest $20 million into the Arlington Assembly plant in Texas to support the production of next-gen, body-on-frame SUVs like the Chevrolet Tahoe, Suburban, GMC Yukon, and Cadillac Escalade. The money will go towards upgrading the factory's conveyors, and the work will be finished next year.

Spy shots already show the next-gen Tahoe and Escalade (gallery above) under development. The new models reportedly ride on the T1XX body-on-frame platform. The photos indicate that these SUVs retain a big, boxy shape, but there are bigger changes underneath the skin. For example, the Tahoe gets an independent rear suspension, and the Escalade allegedly offers a massive infotainment screen that could be as large as 16 inches. The Caddy might get the Super Cruise hands-off cruise control system, too.

See The Spy Shots Of These Big Boys:

Rumors indicate that the existing 5.3- and 6.2-liter V8s would still be available on the new SUVs at launch. The smaller mill might get a 10-speed automatic transmission, though. Look for the Escalade to be available with Cadillac's new 4.2-liter Blackwing twin-turbo V8. There are also rumors of some of these models eventually being available with a hybrid.

Current info indicates these big SUVs arrive for the 2021 model year. The first to debut is allegedly the Cadillac that should premiere around mid-2020. The rest should have unveilings fairly soon afterward.

Improving the Arlington Assembly plant comes hot on the heels of GM's announcement that it's putting $150 million into the Flint Truck Assembly factory to boost production of the Chevrolet Silverado and GMC Sierra heavy-duty pickups. This work should be done by the first half of 2020.

The new upgrades at Arlington are scheduled to be completed next year.

“We’ve been building trucks in Texas for more than 20 years, and our additional investment in Arlington Assembly is proof of our commitment and confidence in our Arlington team,” said Gerald Johnson, GM executive vice president of Global Manufacturing. “We are counting on the Arlington team to continue focusing on building the highest quality products possible for our customers while preparations continue for the launch of the next generation of our full-size SUVs.”

Arlington Assembly is the sole producer of the Chevrolet Tahoe and Suburban, GMC Yukon and Yukon XL and the Cadillac Escalade.

GM has a long history of dominating the full-size SUV market since creating the segment in 1935. Last year, GM dealers in the United States delivered more than 282,000 full-size SUVs — almost four vehicles for each one delivered by the company’s closest competitor. GM’s full-size SUVs are exported to many markets around the globe.

GM has invested more than $4.2 billion in three U.S. assembly plants – Arlington, Flint, Michigan and Fort Wayne, Indiana – to prepare for the launches of its next generation pickups and SUVs and to increase capacity, further improve build quality and drive operating efficiencies.

Since 2009, GM has invested more than $23 billion in its U.S. manufacturing base — more than one-quarter of every dollar spent by any automaker.

Opened in 1954, Arlington employs 4,500. The plant converted from car to truck production in 1997. Arlington Assembly operates on three shifts of production.

Through a series of purchase agreements for wind power, Arlington Assembly runs entirely on wind energy, earning the plant a spot on the U.S. Environmental Protection Agency’s National Top 100 List of the largest green power users.

General Motors (NYSE:GM) is committed to delivering safer, better and more sustainable ways for people to get around. General Motors, its subsidiaries and its joint venture entities sell vehicles under the Cadillac, Chevrolet, Baojun, Buick, GMC, Holden, Jiefang and

Wuling brands. More information on the company and its subsidiaries, including OnStar, a global leader in vehicle safety and security services, Maven, its personal mobility brand, and Cruise, its autonomous vehicle company, can be found at http://www.gm.com.