Mercedes Kicks Off Production Of CLA Shooting Brake In Hungary 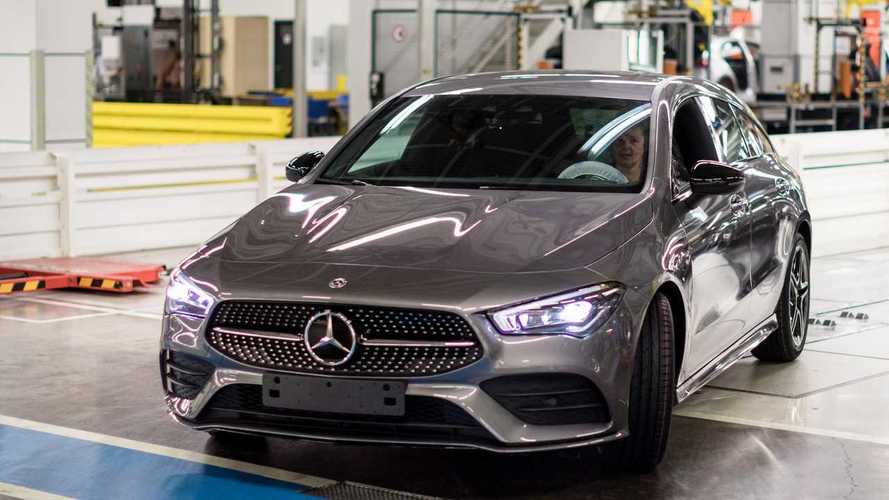 The plant should become CO2-free next year.

Following its official debut in March this year, the Mercedes-Benz CLA Shooting Brake is entering the production phase at the company’s plant in Kecskemét, Hungary. This is the factory where the stylish compact wagon will be produced for the entire world with global deliveries planned to begin in September this year.

The Hungarian Mercedes production site has more than 4,700 employees and managed to assemble more than 190,000 compact cars last year. In addition to the CLA Shooting Brake, the plant is also responsible for the four-door CLA, as well as the new A-Class. This is the only plant where the two CLA models will be produced.

"Many distinguishing features of the smart production of tomorrow are already in place at the Mercedes-Benz plant in Kecskemét,” Christian Wolff, CEO and Site Manager at the plant, comments. “We work on a networked, digital, and flexible basis, so the ramp-up of the new CLA Shooting Brake fits seamlessly into our production processes. All this is possible thanks to our highly-motivated and well-trained workforce. We are proud of this team.”

The Kecskemét factory relies on the so-called Modern Industry 4.0 production technologies with a focus on “flexibility, new digital solutions, and sustainability.” The site is running a pilot experiment project over a period of five months which should optimize the logistics using the airspace above the complex - replacement parts needed for plant maintenance are carried over the rooftops by drones. This should drastically reduce traffic within the plant.

Mercedes says it is constantly developing its production network and plans to have a CO2-neutral energy supply for all its plants in Europe by 2022. The Hungarian production site will turn CO2-free next year and will soon become a paperless factory digitalizing all the data surrounding the production process.

Kecskemét/Hungary. Just a few months after the CLA Coupé, the new CLA Shooting Brake is starting to leave the production lines at the Hungarian Mercedes-Benz plant in Kecskemét. This not only means that Mercedes-Benz Cars is putting the two sportiest models in the new compact car generation onto the roads in well-proven top quality - in production too, the company is setting standards with respect to flexibility, efficiency and sustainability. It means that the international ramp-up cascade for compact cars that started with the new A-Class in Rastatt in April 2018 has reached a further milestone.

"Many distinguishing features of the smart production of tomorrow are already in place at the Mercedes-Benz plant in Kecskemét. We work on a networked, digital and flexible basis, so the ramp-up of the new CLA Shooting Brake fits seamlessly into our production processes. All this is possible thanks to our highly-motivated and well-trained workforce. We are proud of this team. Together these colleagues ensure that the success story of the CLA will continue at the Kecskemét location," says Christian Wolff, CEO and Site Manager of Mercedes-Benz Manufacturing Hungary Kft.

Kecskemét as part of the global production network

The production network for the compact cars has a total of six plants on three continents: as well as Kecskemét there are locations in Rastatt, Beijing (China), Uusikaupunki (Finland), Aguascalientes (Mexico) and Hambach (France). They currently produce seven models: Mercedes Benz A, B-Class, CLA, CLA Shooting Brake, GLA, A-Class Sedan and the long-wheelbase A-Class L Sedan specifically for the Chinese market.

The workforce in Kecskemét produces the CLA Shooting Brake and the CLA Coupé exclusively for the world market. The A-Class has been part of the production portfolio at the Mercedes-Benz plant in Kecskemét since 2018.

Focus on flexibility, efficiency and sustainability

Modern Industry 4.0 technologies distinguish all the production locations of Mercedes-Benz Cars, and these are being constantly developed further. This enables the plants to respond to changing customer wishes with maximum flexibility. The focus is firmly on flexibility, new digital solutions and sustainability. This is because market fluctuations, changing customer needs and a wide variety of equipment variants make it necessary to ensure maximum agility in production. Numerous physical and technological innovations help to bring this about.

For example, a futuristic pilot project is currently under way at the
Mercedes-Benz plant in Kecskemét to find out how the airspace can be used to optimise logistics. Over a period of around five months, replacement parts needed for plant maintenance were carried over the rooftops - between warehouses and maintenance workshops - of the production shops by drones. This additional transport option increases flexibility and reduces traffic within the plant. The project will also be piloted in other locations in the future, so as to improve processes still further.

Other applications at the Mercedes-Benz plant in Kecskemét also provide examples of how Mercedes-Benz Cars is continuously developing its production network further:

During its world premiere at the Geneva Motor Show in 2019, this "designer model" proved a true eye-catcher: with its striking front section and gently contoured, muscular rear end, the second-generation CLA Shooting Brake is not only visually attractive. The new model also offers more space for shopping or sports equipment. Like the CLA Coupé, the estate model is mainly aimed at younger buyer groups.

The technical features are also focussed on individuality and comfort: for example, it includes then latest version of the infotainment system Mercedes-Benz User Experience, MBUX. This now also includes MBUX Interior Assist, which allows the intuitive, natural operation of comfort functions using gesture recognition. Functions such as the air conditioning, seat and lighting control are also intelligently networked via ENERGIZING comfort control. This allows a suitable ambience to be created according to mood.

The new model is also at the cutting edge where safety in concerned: the CLA Shooting Brake has the latest driving assistance systems with cooperative driver support, with active safety functions adopted from the S-Class.

The new CLA Shooting Brake will enter the market in September 2019.

Since the market launch, more than 750,000 units of the CLA Coupé and CLA Shooting Brake have already been sold. The largest markets in 2018 were China, the USA and Germany. Mercedes-Benz already addressed new buyer groups successfully with the first generation of the CLA. In the USA, CLA buyers are on average around ten years younger than the average Mercedes-Benz customer. In Europe in 2018, almost two thirds of buyers previously drove a competitor model.