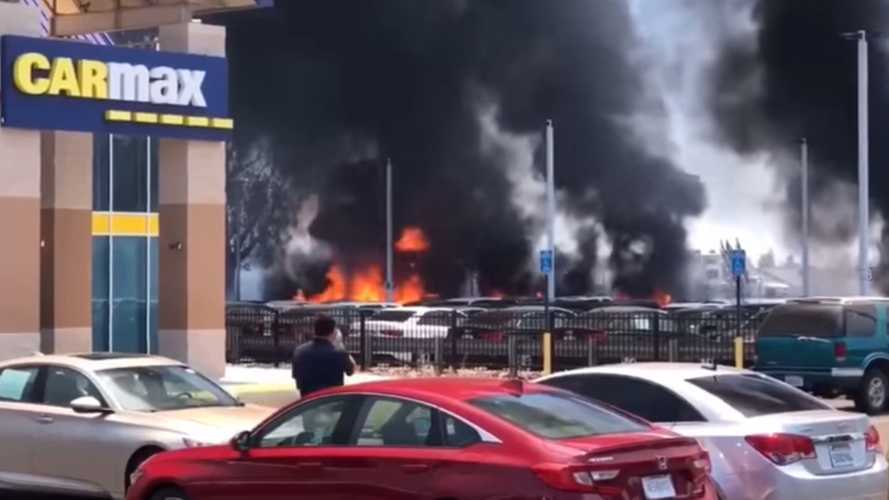 The fire torched 20 acres in South Bakersfield, California and caused over $2.1 million in damage.

Wildfire season is picking up across the western United States, and no place is more on edge than California. That holds especially true for the densely populated areas in the state, so when a fire broke out on June 24 in South Bakersfield, people were understandably concerned. Fortunately this fire was dealt with quickly and thankfully, there were no injuries. But it did wipe out no less than 86 cars at a CarMax dealership.

In addition to the Facebook video above from the San Diego Fire Brigade, 23ABC News in Bakersfield covered the fire extensively. Witnesses say the blaze began around 2 p.m. Pacific Daylight Time, and a semi-truck dragging a chain on the nearby highway could’ve been the source but authorities are unable to confirm that. Apparently, the chain was emitting sparks that ignited grass along the road, which quickly spread in dry conditions. Aerial views of the fire clearly show the scorched shoulder, but the major damage occurred when the fire reached cars parked a CarMax dealership near the highway.

The 23ABC News report says 26 vehicles completely burned. Another 60 cars were damaged to the point of being total losses, and though the exact nature of that damage isn’t disclosed, we suspect at least some of it is the result of massive smoke clouds that billowed during the crux of the inferno. All total, over 20 acres were affected and the losses amounted to over $2.1 million. Thankfully, the fire was contained and extinguished before it could spread further.

Toyota Replacing Nurse's Burnt Tundra As Reward For His Bravery

This certainly could have been far worse. Late last year an electrical fire near Poe Dam in Northern California started the Camp Fire, which engulfed the sizeable town of Paradise less than two hours after it started and made evacuations nearly impossible. The fire ultimately burned over 153,000 acres, destroying 18,800 structures and killing 85 people, becoming the state’s most destructive and deadliest fire ever.