In the race ended the quarter mile, the results would have been very different. 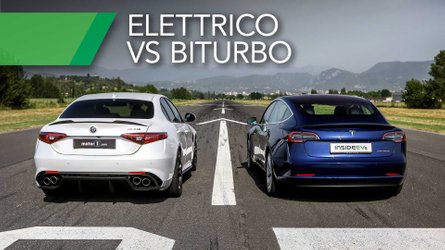 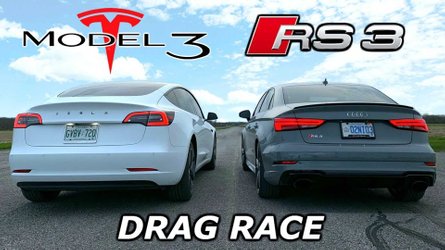 Top Gear host Chris Harris is behind the wheel of the Tesla. He specifically makes this drag race a half mile, rather than the usual quarter mile, to put an extra challenge on the Model 3. In Harris' opinion, electric cars tend to run out of steam above 100 miles per hour (161 kilometers per hour), so he wants to see how this Tesla does.

When the test starts, Harris' plan to extend the race distance makes a lot of sense. The Model 3 leaps ahead off the line to take a massive lead over its European competitors. If the run ended at the quarter-mile mark, then the Tesla would have taken an easy victory.

However, the drag race keeps going, and things start to get competitive. The combustion-powered machines start reeling in the Model 3. Watch the video above to see if one of them has enough acceleration to beat the Tesla over a half mile.

In the end, Harris describes the Model 3 as an "AK-47 disguised as a butter knife" because of its unassuming exterior appearance in comparison to the big intakes and aggressive styling of the European models. Despite the modest styling, the Tesla can crush its competitors in a stoplight drag race. Only when speeds reach a point where an immediate trip to jail would result if the cops catch you, do the other performance sedans stand a chance in a straight line.