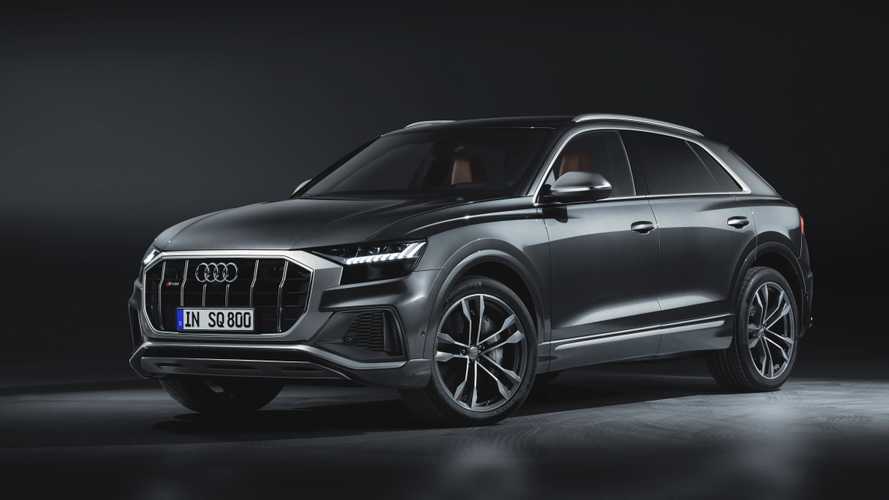 The new flagship SUV churns out a whopping 664 pound-feet of torque, too.

After a quite revealing spy video last year, Audi has finally launched the SQ8 – the sportier version of the Q8 flagship coupe-SUV. As one of the 'S' models of the German marque, you could pretty much expect exhilarating power figures from the SQ8, but more on that later.

Outside, the Audi SQ8 carries the typical coupe SUV styling of the Q8, albeit, made spicier with S-specific parts such as the quad-exhaust tips, redesigned air inlets, and optional 22-inchers. Inside, the SQ8's seats are dressed in leather with Alcantara trims and embossed S logos. Stainless steel pedals and aluminum door sill inlays complete the cabin design.

Now, for the things that matter. The performance-oriented SQ8 is powered by the same 4.0-liter twin-turbocharged diesel V8 from the Audi SQ7. With that said, the SQ8 produces a whopping 429 horsepower (320 kiloWatts) and a head-pressing 664 pound-feet (900 Newton-meters) of torque as early as 1,000 rpm. These massive output figures are then sent to all four wheels via an eight-speed automatic transmission.

The SQ8's mild hybrid system is designed to power the SUV at speeds of up to 14 mph. Power is fed through a 48V lithium-ion battery pack, which also powers the electric-powered compressor that assists the turbochargers at low revs and low-speed acceleration.

Performance ratings include a 0-62 miles per hour time of 4.8 seconds and an electronically-limited top speed of 155 mph. Halting is taken care of by the standard carbon fiber ceramic disc brakes with red calipers.

Standard equipment for the SQ8 flagship coupe SUV includes adaptive air suspension and Audi's Drive Select dynamic handling system. A four-wheel steering feature can be added as an extra, either as standalone or as part of the advanced suspension package which includes sport differential and electromechanical active anti-roll bars.

The diesel-fed Audi SQ8 will hit European showrooms later this year. The gasoline version of the SQ8 will likely reach the United States, which is speculated to be powered by a turbocharged 3.0-liter TFSI V6.