Colorful Mercedes-AMG A45 Concept Drift Poses At The Nürburgring 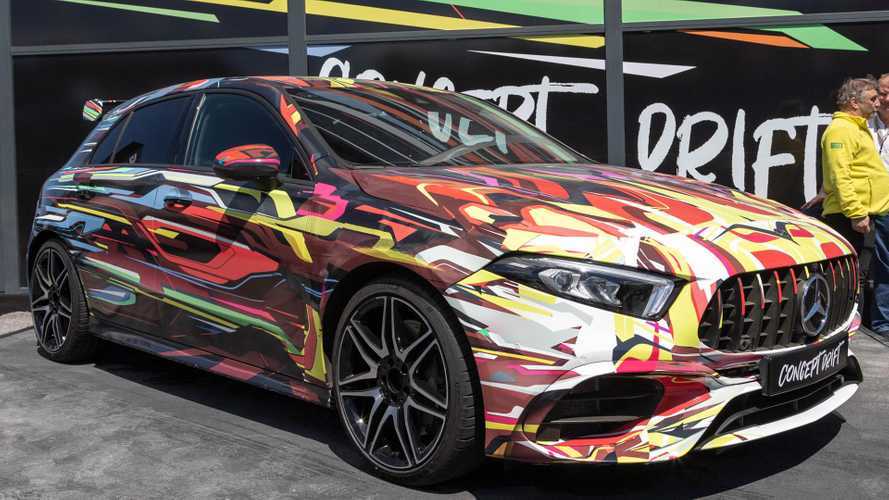 The Mercedes-AMG A45 makes an appearance at this year's 24-hour race at the Nürburgring. It's not on the track, though, and instead is on display in the paddock. The car wears a vivid camouflage design that conceals some of the model-specific design details. This is probably the closest look at the upcoming hot hatch before the official unveiling in July.

Compared to the already spicy A35, the ultra-hot A45 gains Mercedes-AMG's Panamericana grille that features an array of vertical slats. Looking closely, it appears that there might be bulges sculpted into the hood, but they are hard to discern here because of the camouflage pattern. There's less to hide at the rear where the A45 gains a larger diffuser and four exhaust outlets, versus the A35's two pipes.

On the inside, the A45 looks similar to other A-Class models. The primary difference is that there's a whole lot more carbon fiber trim around the cabin.

The A45 uses a sophisticated all-wheel-drive system that includes two electronically controlled clutches that control the torque output to the rear wheels. The high-tech layout lets the hot hatch have a Drift Mode that makes it easy to slide.

The A45 hot hatch won't be available in the United States. However, Americans will get this high-horsepower engine under the hood of the CLA-Class. Expect the speedy sedan to go on sale in the U.S. in 2020.