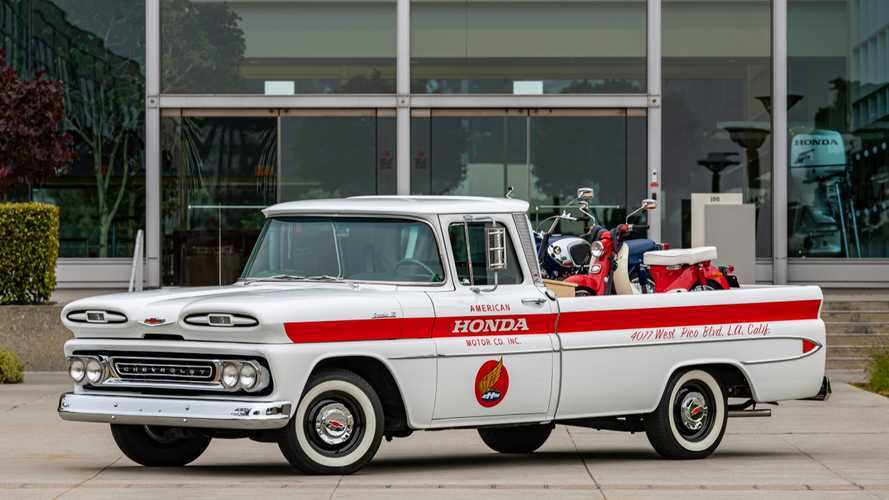 It was done to help celebrate American Honda's 60th anniversary.

Mention Honda to the typical Motor1.com reader and you’ll probably get a response relating to the Civic, Pilot, or possibly the NSX. That should be no surprise because these days, Honda is among the most successful automobile manufacturers in North America. In 1959, however, things were a bit different. Back then, the manufacturer was just beginning its American journey, and it didn’t start with cars. It started with motorcycles, and to get them into brand new Honda dealerships opening across Southern California, the company bought a small fleet of Chevrolet pickup trucks. You probably see where this is going.

First Honda In The U.S. Restored To Its Former Glory
⠀

That first step into the American market occurred 60 years ago, and to help celebrate the occasion, Honda found a classic Chevy half-ton pickup truck similar to one featured in a photo taken back in 1961. The automaker then restored it and recreated the distinctive paint scheme that set Honda’s delivery fleet apart from other trucks on the road at that time. How cool is that?

The project was completed just in time for American Honda’s 60th-anniversary celebration at the company’s headquarters in Torrance, California. To properly recreate the classic photo, Honda also sourced a pair of vintage motorcycles for the truck to haul, specifically and CB160 and a Honda 50 – AKA the Super Cub which would ultimately become the most produced motor vehicle in history.

Ah to have been in the room with Chevrolet representatives 60 years ago when Honda was purchasing these pickup trucks. Do you suppose any of those Bow Tie execs would’ve ever imagined Honda would not only dominate the motorcycle market, but evolve to become a major automotive competitor as well? In any case, we’re very impressed to see Honda taking the high road by investing its time and money to preserve a bit of cross-company history.

Shortly after American Honda Motor Co., Inc. (AHM) first opened for business in 1959, the company purchased a small fleet of Chevy pickups to deliver motorcycles to its fledgling dealers across Southern California. One of these trucks is depicted in an iconic photo circa 1961 in front of AHM's original office at 4077 Pico Blvd. in Los Angeles. Underscoring their importance during those early days, American Honda restored a truck to authentically match the one in the old photo, helping celebrate the company's 60th anniversary.

Tapping its U.S. archives and memories of retired Honda associates for details, a 1961 Chevy half-ton pickup was found and carefully renovated, replicating the original paint scheme as used by company salesmen delivering motorcycles to dealers to sell on a consignment basis. These trucks helped American Honda quickly establish a U.S. market foothold, starting in Southern California. By 1965, Honda was the best-selling motorcycle brand in America with amarket share of almost 72 percent.

To ready the special truck for its debut at AHM's 60th anniversary celebration on June 11, it was given a mild mechanical freshening plus new factory-correct white paint and hand-painted graphics like the originals. Two vintage motorcycles, a Honda 50 and CB160, like those originally carried in the trucks, are placed in the truck bed. The completed package is now on display in the lobby of American Honda's Torrance, Calif. headquarters.

Plans for public display include the 2019 SEMA Show and other events around the country, as well as classic vehicle gatherings around Southern California. Ultimately, the truck will make its way to the American Honda Collection Hall in Torrance, where it will be staged in front of a replica of the company's original Los Angeles office.

Precious Cargo
The truck's cargo—in this case two important motorcycles from those early days—were also procured, helping recreate what the package looked like as salesmen traveled around the state to support their dealers.

A red 1965 Honda 50, known in other parts of the world as the Super Cub, occupies the left side of the truck bed. The first big success among the Honda motorcycles sold in the U.S., the “Nifty Thrifty Honda 50” as it was advertised, put Honda on the map in America in the early 1960s—and around the world for that matter.

Easy to ride for almost anyone, the Honda 50 became a surprise hit – immortalized in the “You meet the nicest people on a Honda” marketing campaign. This 1965 model runs and rides perfectly and is ready for another 60 years of enjoyment.

Also sharing the Chevy truck bed is an original 1965 Honda CB160, one of Honda's early small displacement sport bikes. The little CB was a big hit for American Honda, following in the footsteps of the larger CB77 “Super Hawk” in moving away from a stamped steel monocoque in favor of a tubular steel frame.

Cycle World magazine dubbed the new bike a "baby Super Hawk" at the time. It was popular with young riders moving up from the Honda 50 or 90 who wanted something that looked like a true motorcycle. This 1965 model was completely restored last year and is in perfect running order.