Gemballa Teases Its Own Supercar With More Than 800 HP

We could get our first official look as early as next year.

Gemballa, the German aftermarket tuning company known for cranking out hot Porsches and other projects under its namesake, is now developing a supercar. Gemballa announced it while not only dropping the teaser above but also opening up a search for new investors – a first for the company since 2010.

The company released little information about its new supercar other than a string of superlatives such as “uncompromising,” “radical,” “pure,” and “luxurious.” Steffen Korbach, Gemballa’s owner and managing director, said the car would feature an aggressive design with an engine making more than 800 horsepower. Those are bold claims. 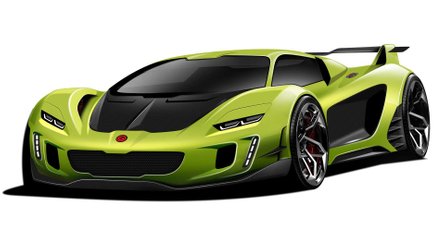 From the teaser, we can see the supercar will sport a mid-engined layout paired with aggressive aerodynamics and a super-sleek shape. There’s a large air intake behind the door that slices into the side of the supercar. However, if you look closely, you can see this is a design sketch – a hint at what the possible supercar could look like. The wheel arches are massive, which attribute to its sleek look. It’s unclear if the supercar will have a bespoke platform or borrow its underpinnings from another manufacturer such as Porsche and its 911.

A tuner venturing into developing its own supercar isn’t new. Many end up being super limited in production with just a handful making it out into the real world, whether it’s limited by cost, demand, or exclusivity. The real test for the Gemballa supercar will come when the company gives the public its first look at the production model. The company says clients will soon see the first designs with a prototype debuting as early as next year.

Announcing the supercar alongside a call for new investors could give the company a much-needed boost. While it has continued to crank out tuned Gemballa-branded Porsches, the company’s output has slowed in recent years. If Gemballa’s timeline is correct, production for its supercar could begin in 2022 with customer deliveries following. Hopefully, we’ll know more soon about how Gemballa plans to crank out more than 800 hp from the car.

Leonberg.     Since its foundation in 1981, GEMBALLA has established itself as a renowned car modification company, and since then, it has become famous for the most innovative, unusual, extreme, expensive and exclusive vehicle conversions. The company made automobile history with the worldwide success of the limited edition, comprehensively refined iconic sportscars GEMBALLA AVALANCHE, MIRAGE, MIG-U1, TORNADO and MISTRALE. GEMBALLA has been listed as a registered car manufacturer with the German Motor Vehicles Authority since 1985.

Search for investors launched: For the first time since 2010, GEMBALLA is opening up for new investors

Since the takeover in 2010, the owners have invested over 15 million Euro in the relaunch and numerous new projects in the tuning area. With further investments amounting to 20 million Euro, the company is planning their own super sports car for the first time, as a complete, new development.

Steffen Korbach, owner and Managing Director of GEMBALLA GmbH, has big plans for the company: “We’re planning a thoroughbred super sports car with a unique, aggressive design and engine power considerably over 800 bhp. As part of this, we’d like to reference the existing GEMBALLA legends, and implement a range of innovative concepts. You can expect an uncompromising vehicle, radical, pure and luxurious. At the same time, we would also like to establish GEMBALLA in future as a stand-alone small production run manufacturer, but also launch as an exclusive modification company for extreme, complete conversions of Porsche cars.

The first designs will be presented to selected clients soon, and the first prototype should be on display as early as 2020. We currently plan to start production in 2022.

The capital required to finance the project will be raised through private equity and venture capital companies. Concrete discussions are already underway.