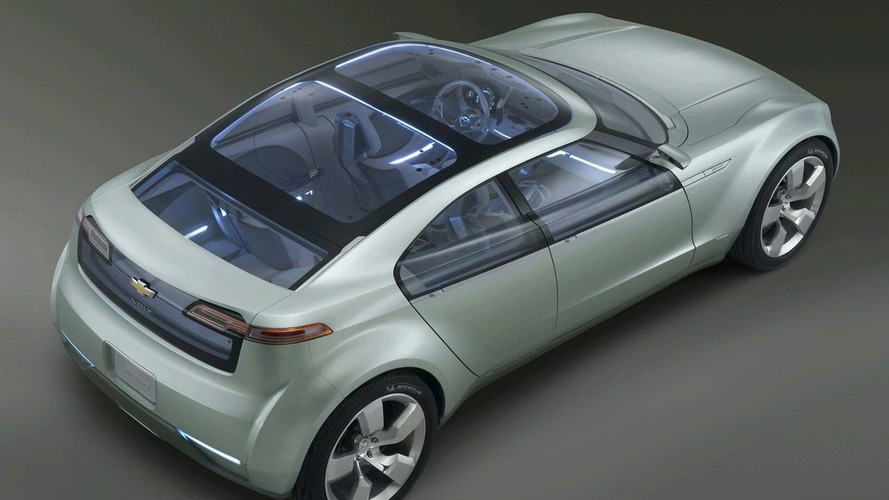 2010 Chevrolet Volt will spawn many other GM electric cars of all sizes. Europe Volt version gets an Opel badge.

Chevrolet is staking more than just its 97 year old reputation on the Volt electric half-breed; the very life of its parent General Motors is on the line. Volt will be in public hands by the end of 2010 if all goes according to schedule, and so far we don’t have reason to suspect all will not go well. Two pieces of news on the Volt front have landed on our laps.

Firstly the car will spawn other similar models, also powered by socket-rechargeable electric batteries that are good for 10 years of good service, at least. So Volt will serve as a sort of platform from which a whole range of electric-powered GM cars will be produced. The lithium-ion batteries measure about 5ft in length and weigh around 400 pounds. GM says these suckers are able to run the Volt for 40 miles, which is said to be the average distance an average American travels to and from work on a daily basis. The problem with the batteries is apparently not their power abilities but their stability. Two suppliers, one South Korean and the other American are the last in the running to provide these batteries, and GM will make a decision on which to go with by the end of this year.

Second piece of news is that Europe will get a Volt version not to be badged Chevrolet but Opel. It’s not clear though if other markets like Asia, South America and Africa are on the Volt list but we assume this will depend largely on the US/ Euro uptake. Pricing could be an issue though as development costs have been quite substantial and GM is working hard behind the scenes to get US federal government to subsidize at least part of the cost. Meanwhile, Toyota says it will introduce a concept like Volt in 2010 at a much lower price but offering similar performance.