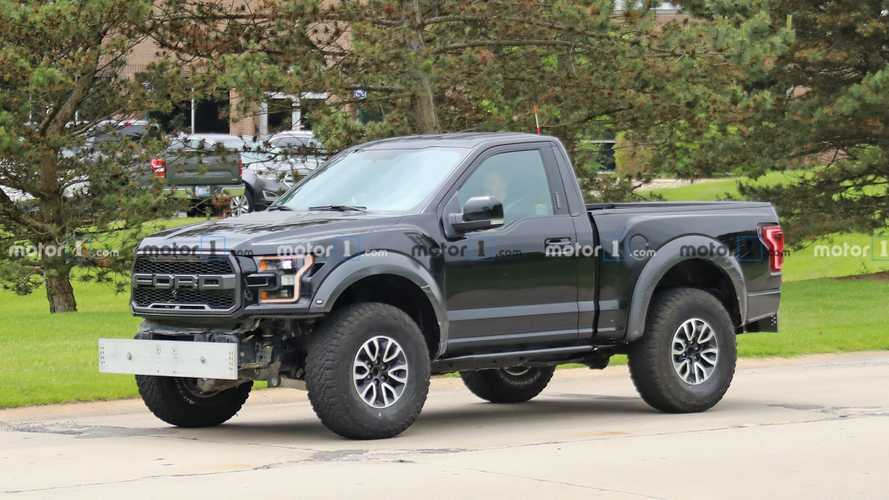 Could Ford be exploring a Raptor version of the forthcoming Bronco?

We know the Ford Bronco is coming in both two-door and four-door trim. Select Ford dealers have seen it, and we’ve sort of seen it teased under a tarp. We’ve seen some oddly proportioned short-wheelbase F-150 test mules that are presumably exercising the Bronco’s underpinnings, but this is the first time we’ve seen anything like this. And frankly, it has us scratching our heads just a bit. Is this another Bronco mule, or could Ford have something else going on with its F-150 Raptor?

The only reason we ask this question is because this test vehicle looks surprisingly good. Sure, the front and rear fascias are missing, but plug those back in and suddenly you have a single-cab, short-bed Raptor. Presently, the only way to order up Ford’s high-speed off-roader is either as a SuperCab or SuperCrew truck with the 5.5-foot bed. For that matter, you can’t order any F-150 with a single cab and the ultra-short bed, so even in standard guise, this truck shouldn’t exist.

It’s also a mystery because the missing fascias give us a decent look at the underpinnings of this tester. We can’t spot tiny details, but to our eyes, this truck is running the Raptor’s suspension. It certainly has the ride height and bodywork, which raises yet another question. If this isn’t a test mule for a shortened Raptor, could Ford have plans for a Raptorized Bronco in the future? The wheelbase certainly looks like something befitting the forthcoming SUV.

If we had to guess (and obviously we do) we’d say this is some kind of Bronco test vehicle, possibly exploring Raptor upgrades on the shorter two-door wheelbase. Bolting up an F-150 cab and bed would certainly be a clever disguise as opposed to camo-wrapping a Bronco body. Or, this could simply be an after-hours engineering project to explore crazy ideas that might never see the light of day.

Regardless of its purpose, it certainly caught our attention. Whether such a setup comes to the Bronco is something we’ll have to wait a while on, as the long-awaited SUV won’t be revealed until next year.