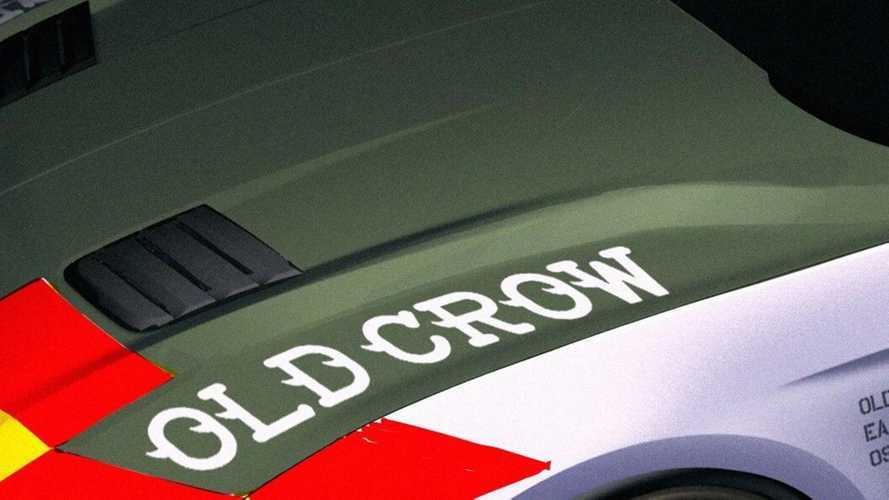 It hits the auction block for charity in July.

On the 75th anniversary of D-Day, Ford teases its latest custom Mustang GT for the annual charity auction at EAA Airventure on July 25. The new one wears a livery taking inspiration from the "Old Crow" P-51 Mustang fighter planes that Colonel Bud Anderson flew during World War II, including providing more than six continuous hours of air support during D-Day.

"This year’s design is especially fitting for the 75-year commemoration of D-Day and the special place we reserve for heroes like Col. Anderson and countless others who demonstrated unparalleled valor and sacrifice," Craig Metros, Ford design director, said about this year's custom Mustang.

Roush Performance handled building the “Old Crow” Ford Mustang GT. The teaser photos don't show much of it yet, though. There's a matte green hood with black vents. A red and yellow checkerboard pattern covers the nose. Running up the hood, the Old Crow name appears in white in the style of the whiskey brand's label in the 1940s. The lower part of the body appears to be light gray. Judging by the photos of Col. Anderson's plane, it's possible that the car has a red trunk to match the aircraft's rudder.

Mechanically, the "Old Crow" Mustang GT packs a Roush/Ford Performance supercharger that pushes the output above 700 horsepower (522 kilowatts), rather than the stock 460 hp (343 kW). The Blue Oval also reports there are other performance parts but doesn't provide any details about them, yet. More details arrive ahead of the charity auction.

Col. Anderson is old friends with Roush Performance boss, Jack Roush. He even helped to restore a P-51 Mustang plane in the Old Crow livery in honor of Col. Anderson.

Last year's custom Mustang for the EAA Airventure auction took inspiration from the P-51s that served in the Royal Air Force that defended Britain. It sold for $420,000. To date, the Blue Oval has raised over $3.5 million for this group by auctioning aircraft-themed vehicles.

Anderson, a triple ace fighter pilot, flew two combat tours and 116 missions in his P-51 Mustangs he nicknamed Old Crow. He was never hit by enemy fire, including while providing aerial support to Allied troops on D-Day. Anderson spent more than six continuous hours in flight that day in his P-51 Mustang.

Built by Roush Performance to mark the 75th anniversary of the Allied invasion of Normandy, the “Old Crow” Ford Mustang GT will be auctioned July 25 at “The Gathering” annual auction during the Experimental Aircraft Association’s 2019 AirVenture in Oshkosh, Wisconsin. All proceeds from the auction will be donated to the Experimental Aircraft Association’s Aviation Foundation, which encourages and educates the next generation of pilots.

“This year’s design is especially fitting for the 75-year commemoration of D-Day and the special place we reserve for heroes like Col. Anderson and countless others who demonstrated unparalleled valor and sacrifice,” said Craig Metros, Ford design director. “It’s an annual highlight for many on the Ford design team to pay homage to our war heroes by creating a custom tribute vehicle to support the next generation of aviators.”

Ford has partnered with the Experimental Aircraft Association’s AirVenture for 21 years, building and donating 11 custom-designed vehicles to help raise more than $3.5 million to date. These include the 2018 Eagle Squadron Mustang, 2016 “Ole Yeller” Mustang and 2015 Mustang Apollo Edition. Of the vehicles Ford has donated for auction at AirVenture, the 2008 Mustang AV8R sold for the highest price of $500,000.

Anderson, 97, earned more than 25 decorations, including the Distinguished Flying Cross, Bronze Star and Air Medal. He flew two tours with the 363rd Fighter Squadron of the 357th Fighter Group and is recognized as the third leading ace with 16 aerial victories.

The P-51 Mustang is a single seat, single engine fighter originally produced in 1940 by North American Aviation. Variations of the plane were used in WWII and Korean War, among other conflicts, and specialized in long range, high altitude escorts. Roush, a longtime friend of Anderson’s, has previously restored a vintage P-51 Mustang airplane with “Old Crow” badging to honor Anderson.

Look for additional details on the “Old Crow” Ford Mustang GT to be revealed in the coming weeks.

Bidding at “The Gathering” auction is open to all interested parties. Bids can be made in person or remotely online.

The Experimental Aircraft Association (EAA), based in Oshkosh, Wisconsin, embodies The Spirit of Aviation through the world’s most engaged community of aviation enthusiasts. EAA’s 220,000 members and 900 local chapters enjoy the fun and camaraderie of sharing their passion for flying, building and restoring recreational aircraft. For more information on EAA and its programs, call 800-JOIN-EAA (800-564-6322) or go to eaa.org.