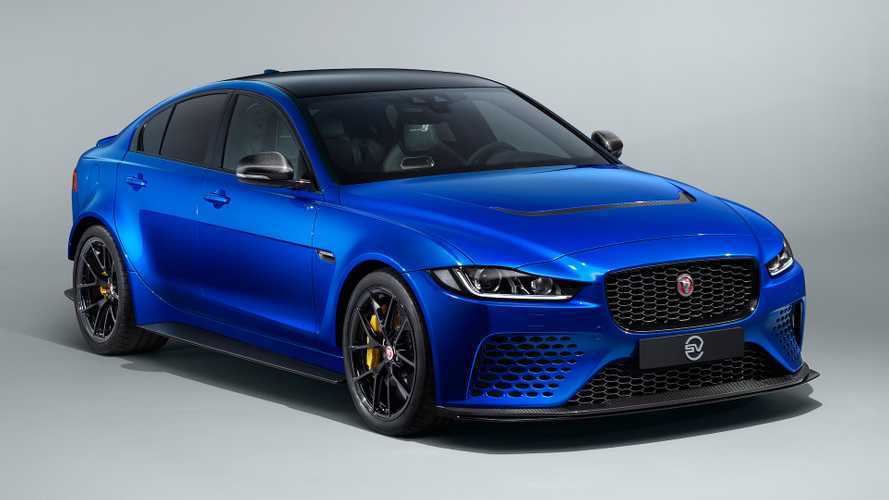 The Jaguar XE SV Project 8 is ludicrous. With a 592-horsepower (441-kilowatt) supercharged 5.0-liter V8 underhood, it sprints to 60 miles per hour (96 kilometers per hour) in a neck-snapping 3.3 seconds, and assuming there's a long enough straight, on to a top speed of 200 mph (321 kmh). But with its massive rear wing and outlandish graphics, the XE SV Project 8 isn't exactly the definition of subtle.

With that in mind, Jaguar today debuted a limited-run, less-aggressive version of its beloved XE Project 8. The "Touring Spec: tosses the Project 8's standard rear wing and graphics (though, graphics are still optional) in the trash for a subtle lip spoiler and standard paint instead. Available in four colors – Valencia Orange, Corris Grey Satin, British Racing Green, and the Velocity Blue pictured here – the end result is a super sedan with a super sleek profile and all the same power.

The supercharged 5.0-liter V8 and 592 horses from the conventional XE Project 8 carry over. The Touring trim retains its 60 sprint time of 3.3 seconds, but drops its top speed from 200 mph to a limited 186 mph (300kmh). Not that we're complaining.

Eager buyers better get their hands on the simplified super sedan in a hurry. Jaguar will build just 15 examples of the XE Project 8 Touring worldwide, and all in the traditional four-seat configuration. Though, no word on whether this trim will cost the same as the standard Project 8, which asks $188,495 in the U.S. (£149,995 in the U.K.).

Despite this significant aerodynamic revision, the 5.0-litre Supercharged V8 Project 8 with Touring Spoiler retains an extraordinary level of on-road performance and driver engagement for a sports sedan, accelerating from 0-60mph in 3.3sec (0-100km/h in 3.7sec) and on to a limited top speed of 186mph (300km/h).

Project 8 has received outstanding critical acclaim since its launch, demonstrating the Special Vehicle Operations team’s ability to create a compact Jaguar sedan with supercar-rivalling performance. Touring specification extends the appeal of Project 8 to performance car enthusiasts and collectors who prefer a more discreet appearance, without compromising its driver-focused on-road dynamics.

Special Vehicle Operations will hand-assemble no more than 15 examples of the Touring specification Project 8 at its Technical Centre in Warwickshire, exclusively in four-seat configuration.